An icon of socialist architecture 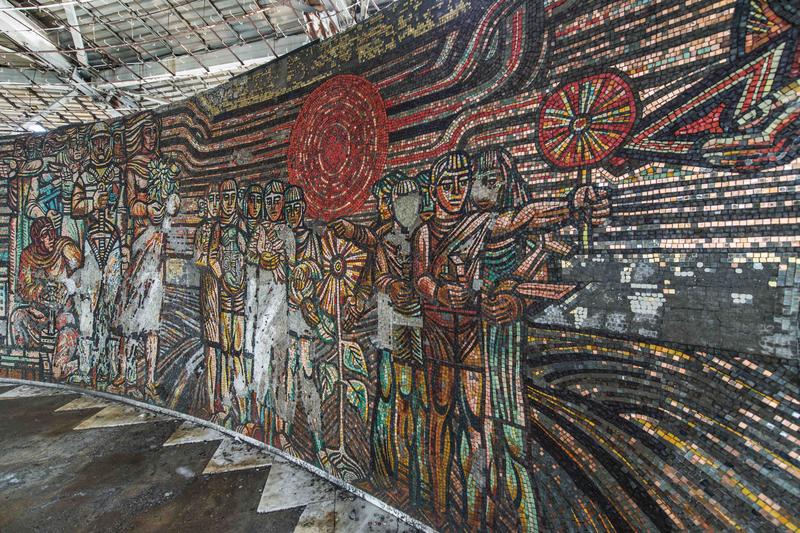 Monumental mosaic surfaces of over 900 square meters, which are some of the largest modern murals in Europe, are decaying in the Buzludzha monument. Scientists have now begun conservation work. Romain Veillon, Free for use in reporting on TUM, with the copyright noted. 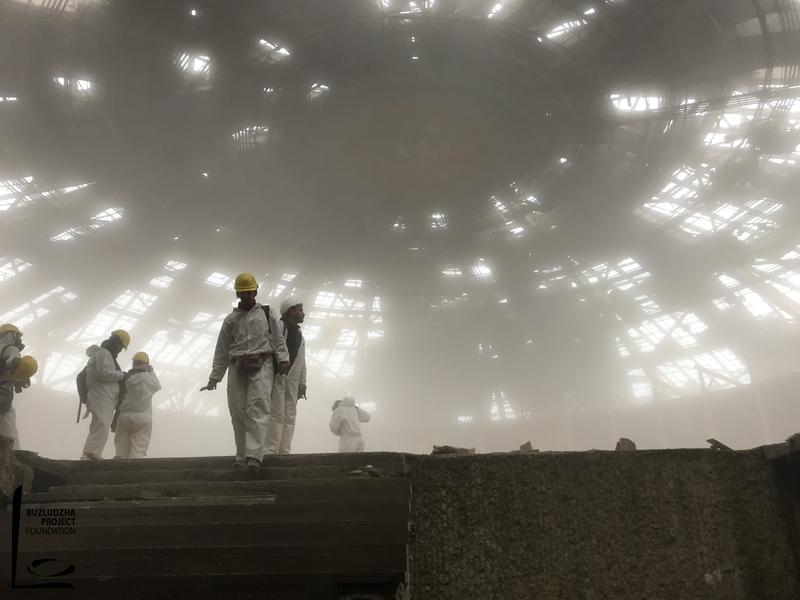 Clouds pass through the Buzludzha monument. Tonja Van Roij, Buzludzha Project Foundation; Free for use in reporting on TUM, with the copyright noted.

The huge Buzludzha monument in the Bulgarian mountains stands out. It looks like a stranded UFO that is increasingly decaying. In an interview, Professor Thomas Danzl explains how this iconic monument of post-war socialist modernism is to be preserved, why this is also about controlled decay, and why he was impressed by more than just the largest modern murals in Europe.

On the remote Buzludza peak in the mountains of Bulgaria stands an unusual monument. Its domed hall was built for state functions and celebrations. It contains massive mosaics, which depict the story of Bulgaria’s development, and above everything, shines a red star-shaped window to honor and glorify Soviet Russia. However, after the fall of the government in1989, the complex was abandoned and left to vandalism. All access to the building was closed to the public three years ago.

A group of scientists led by Thomas Danzl, Professor of Conservation-Restoration, Art Technology and Conservation Science at the Technical University of Munich (TUM), together with ICOMOS Germany, a sub-organization of UNESCO, and the Buzludzha Project Foundation has now begun conservation work. Prof. Danzl has recently reported on this project in an interview.

Prof. Danzl, the Buzludzha Monument seems to be an unloved and controversial socialist monument. How do you deal with a monument that is no longer compatible with today’s political conditions?

The Buzludzha monument was inaugurated in 1981 for the 1,300th anniversary of Bulgaria and the 90th anniversary of the Bulgarian Communist Party. It has been state property without a function since the political upheaval of 1989/90. In recent years, it has once again attracted international attention as a still unlisted icon of post-war socialist architecture in Europe. Such buildings are also a natural part of our history and identity. And as history teaches us, erasing history is not generally beneficial. Where material memory is erased, a vacuum remains, a void that longs to be filled, and therein lies a particular danger, but also an opportunity.

In this respect, the place, the building, and the materials all continue to speak, and I (as a conservator, restorer, and monument conservator) am the interpreter who deciphers and tells these stories. Contextualization is absolutely necessary, so I cannot simply preserve such monuments without commenting on them.

Would you say that the Buzludzha monument, as testimony of a past regime, is not being restored to its original state, but rather conserved?

We recognize what the ruin has become and try to bring it into a new balance between preservation and controlled decay. Conservation means using minimally invasive means to maintain the condition that has come into existence over the past 40 years. The “talking material” - including over 900 square meters of some of the largest modern murals in Europe, comprised of more than two million mosaic stones and which were worked on by 16 recognized great masters of Bulgarian art - clearly tell us about what the building was, a monument to the communist party, but beyond that, the material also tells us the story of the vandalism in the 1990s, when Bulgarians no longer identified with the regime, as well as about a youth culture and its means of appropriation, with graffiti and the idea of rushing through the building with quads.

Appropriation happens in many ways. These stories are to be read as a whole, much like a book. We don’t wish to only give answers. It is equally important to raise questions and moderate those questions.

When you started the project, what condition was the building in?

The building is very large and stands on a mountain top where it has extreme exposure to meteorological and geological forces. The work has been a challenge to us not only mentally but also physically. The monument has been closed to the public for three years, while previously it was very popular in dark tourism. This type of tourism (also known as lost-places tourism) involves entering abandoned buildings or grounds to take great photos. However, for the past three years, the monument has seen no further development from human intervention, while at the same time, nature has continued its work. Much of the roof is now gone and the mosaics are extremely vulnerable to water intrusion from above, which is intensified in winter by the destructive work of frost and ice.

How is the monument being conserved?

Last year, with a grant program from the Getty Foundation, we went about the first actual preservation effort since the destruction beginning in 1990. We built a protective metal roof and an enclosure with textiles. To install the tarpaulin, we acquired helpers through social media. The results are that wind erosion is now eliminated, direct water entry is completely stopped, and our latest monitoring results have shown that it is also frost-free. These measures have provided some respite for us. However, we will continue to work with professional colleagues and volunteers to secure it this summer.

Furthermore, we want to make the Buzludzha monument attractive for the future. It should not be just a ruin and for that, we need a proper roof. Currently, we only have a protective roof. Ensuring the protection of the building will be the task of an international competition to find a clever way of using renewable energy sources to create an ecologically sustainable shell which will allow year-around use.

How will the Buzludzha monument become a place of remembrance?

Whenever I institutionalize memories, be it through museums or places of remembrance, I am obligated to offer as many gateways to insights as possible. As part of the process of creating a memorialization plan, the Buzludzua Project Foundation has also launched a campaign called “Buzludzha’s Unwritten Stories,” which has collected eyewitness accounts of the monument’s construction and history. The goal is to document knowledge about the monument in narratives and memories thus recording the experienced significance of the structure for contemporaries as well as to promote dialogue between generations.

What has impressed you most when you think about your work on the site so far?

You can read the anger of the Bulgarians who no longer wanted to conform to the given socialist ideals in the building. In the basement rooms, for example, the tiles were knocked down with sledgehammers. You can actually see the impact holes there. That’s what I found most impressive, along with the beauty of nature.

The beauty of nature undoubtedly includes the wild horses. Once, we came up and there was a herd of wild horses in front of the entrance with its fragmentary letters of the communist manifesto. The weather on the spot is also interesting. The weather can change sometimes every half hour and clouds pass through the building. This conveys an image of the power of natural forces.