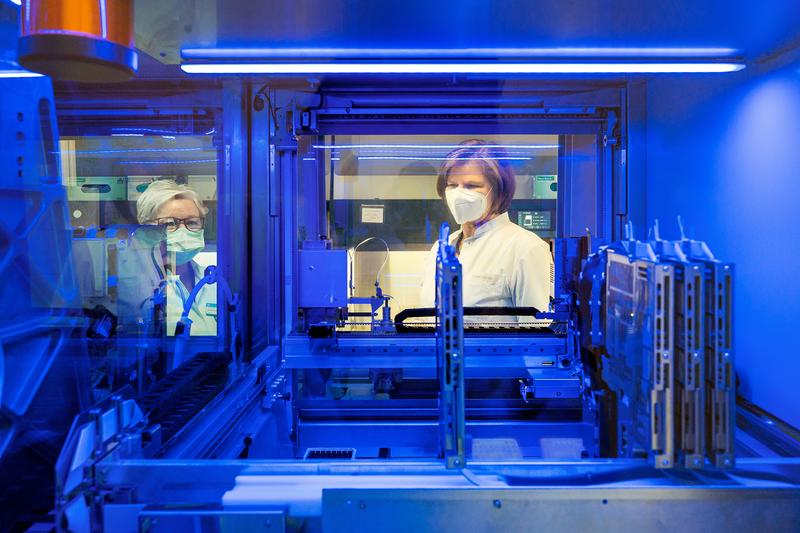 Prof. Dr. med. Ulrike Protzer (r), head of the Institute for Virology at the Technical University of Munich and Director at the Helmholtz Munich, with an employee at the PCR analyzer at the TUM University Hospital rechts der Isar. Astrid Eckert / TUM

Vaccines against the SARS-CoV-2 virus have been made possible by an unprecedented worldwide collaboration. But medications against Covid-19 have as yet seen only partial success. With the support of the Bavarian Research Foundation, a Munich research team has developed a protein which has reliably prevented infection by the virus and its variants in cell culture tests.

The SARS-CoV-2 virus uses a protein called Angiotensin Converting Enzyme 2 (ACE2) on the surface of human cells as an entry gate. This is where the spike protein of the virus finds a hold in order to ultimately infect the cell.

Recombinant antibodies are already being used in therapy for Covid-19 illnesses, including at the TUM University Hospital rechts der Isar; nevertheless the virus has used mutation to evade attacks by therapeutic antibodies and in part also the natural antibodies formed after vaccination.

Endogenous proteins turned against the virus

A team of scientists from the Technical University of Munich (TUM), the Ludwig Maximilians-University of Munich, Helmholtz Munich, and Munich-based Formycon AG are pursuing a different strategy: They have combined the ACE2 protein with part of a human antibody protein and have thus created an active ingredient which blocks the spike protein of the virus. In cell culture tests they were able to completely neutralize the virus and prevent infection.

"Both vaccines and antibody medications have the same problem, that the virus manages to evade them by just a little bit more with each successful mutation," says Ulrike Protzer, head of the Institute of Virology at the Technical University of Munich and at Helmholtz Munich. "This results in what are called immune escape variants."

The team led by Prof. Protzer and Johannes Buchner, Professor of Biotechnology at the Department of Chemistry of the Technical University of Munich in Garching, is thus focusing on the most important target of the virus, the ACE2 protein.

The optimum strategy against mutations

Since the simple ACE2 protein would be broken down too quickly by other enzymes in the human body, the team fused the ACE2 protein with a fragment of the human antibody immunoglobulin G (IgG).

"As the virus needs optimum docking on the ACE2 protein in order to survive, the virus cannot evade a medication which is based on exactly this protein," says Prof. Buchner, adding, "The fusion protein will therefore also be reliably effective against future mutations."

FYB207 can potentially be administered against all Corona virus types which use ACE2 as a docking point – not only against variants of the current SARS-CoV-2 virus. ACE2 also has a natural enzyme activity in the cardio-vascular system which could offer additional protection against the threat of organ failure for the lungs, heart and kidneys.

Research work began with the testing of various combinations of ACE2 and immunoglobulin fragments as fusion proteins in the laboratory. The team decided on a fragment of the IgG4 protein regarded as a reliable fusion partner. Minute mutations were introduced in order to increase stability. Two variants are currently undergoing thorough investigation in pre-clinical studies.

"The fusion protein can be easily created biotechnologically," says Dr. Carsten Brockmeyer, co-author of the study and CEO of Formycon AG. "In the context of the partnership we also made sure that the selected active ingredient variants have pharmacologically favorable properties. We hope to be able to begin with the first clinical studies in the first half of the upcoming year."

"The SARS-CoV-2 virus and its related variants will continue to challenge humanity in the future," says Prof. Ulrike Protzer. "Even if vaccination is a highly reliable way to prevent severe symptoms in the course of the illness, the significantly more contagious Delta and Omicron variants have shown that both recovered and vaccinated patients can be re-infected. With regard to future, possibly even more contagious variants, we need a broadly efficacious active ingredient against the virus in addition to vaccination."

The research activities were supported by the Bavarian Research Foundation, the FOR-COVID network of the Bavarian State Ministry of Science and Art, the Helmholtz Association and the Peter and Traudl Engelhorn Foundation.

Development activities are currently in the pre-clinical phase. Participation in clinical studies is not possible at the present time.