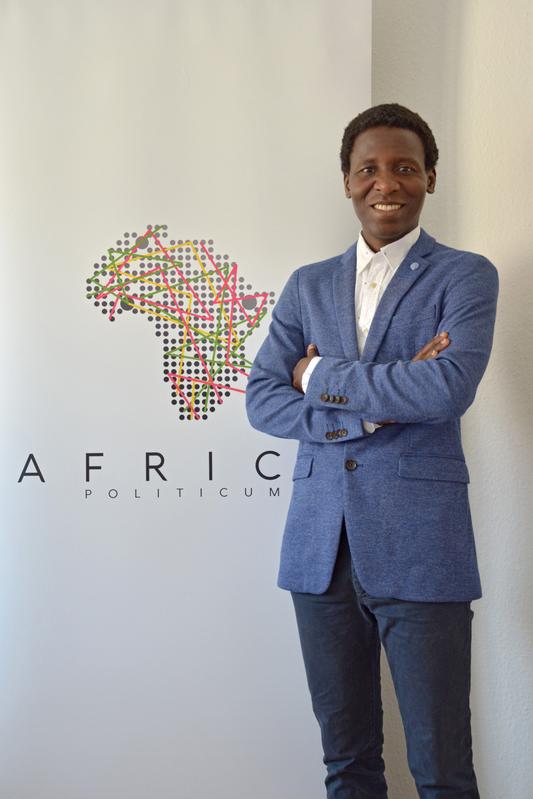 Federal President Frank-Walter Steinmeier has awarded Dr. Hanza Diman from Benin, alumnus of the University of Bayreuth, the Order of Merit of the Federal Republic of Germany on the occasion of German Unification Day 2022. During a ceremony themed "Building Bridges", the graduate of the Bayreuth International Graduate School of African Studies (BIGSAS) accepted the award today, 30 September 2022, at Bellevue Palace in Berlin. Together with him, 20 other persons were honoured with the Federal Cross of Merit for their public commitment.

Dr. Hanza Diman (34) studied German language and literature at the University of Abomey-Calavi in Benin from 2007 to 2011, majoring in "Political History and Culture of Germany". After completing his bachelor's degree, he moved to the University of Bayreuth in 2012 and completed a master's degree in "African Culture and Society" in 2015. Here he focused in particular on issues of social inequality from a historical and political perspective and examined forms of coup d'état in African history in his master's thesis. After completing his master's degree, he joined the international graduate school for African Studies BIGSAS, which is now integrated into the Cluster of Excellence "Africa Multiple" at the University of Bayreuth. In 2020, he earned a doctorate with a study on a research topic that combines energy, social and environmental aspects. Using the example of the Togolese capital Lomé, he investigated the question of how and with what consequences the use of firewood as an energy source has changed from colonial times to the present.

For many years, Dr. Hanza Diman has worked in various projects for cultural diversity, for a fairer society characterized by respect and tolerance, and for better mutual understanding between people from Germany and Africa. One example is his commitment as a staff member and later as coordinator of "BIGSAS@school". In this Bayreuth project, which has since been renamed "Afrika@School", African doctoral students from the field of African studies teach at schools in Upper Franconia and participate in theme and project days about Africa. As co-founder of the association "Model African Union (MAU)", the young Beninese scholar repeatedly organized conferences lasting several days with high-ranking guests from Africa. Here, students were given the opportunity to test their political commitment and learn to understand political action as delegates.

"Dr. Hanza Diman spent many years as a master's student and as a doctoral student at the University of Bayreuth working for a society in which diversity is lived and valued. The open, communicative and imaginative exchange between people in Germany and Africa is a matter close to his heart. Together with all members of BIGSAS, I am very pleased that he was honoured today by the Federal President with the Order of Merit of the Federal Republic of Germany," says Prof. Dr. Andrea Behrends, Director of the Bayreuth International Graduate School of African Studies (BIGSAS).

"Dr. Hanza Diman has linked his scientific work with everyday commitment in an exemplary manner and thus made an outstanding contribution to processes of understanding in an environment characterized by cultural and religious diversity. In this way, he exemplifies bridge-building between science and society in African studies, as we also strive to do in the Cluster of Excellence 'Africa Multiple'," explains Prof. Dr. Rüdiger Seesemann, spokesman of the Cluster of Excellence "Africa Multiple" at the University of Bayreuth. According to Seesemann, it is particularly important to combine scientific and practical knowledge through transdisciplinary research. "In the cluster, we pursue this goal in constant dialogue with our African partner institutions and while clearly distinguishing ourselves from all forms of social discrimination."

The great social and political commitment for which Dr. Hanza Diman was honoured by the German President is also expressed in his initiative to found the association "Africa Politicum". This independent and non-profit "think-and-do-tank" aims to stimulate reflection on political, socio-economic, cultural and geopolitical issues related to Africa and its diaspora, including the changing global context. Dr. Hanza Diman organizes regular meetings for "Africa Politicum" to discuss current developments in Africa. Meanwhile, he is a much sought-after speaker in Germany when it comes to reflecting on African and European perspectives on fundamental current challenges. As a staff member in German-African institutions, for example in the "Farafina Institute" in Nuremberg, he is helping to break down barriers to understanding and prejudices between the two neighbouring continents. Since 2021, Dr. Hanza Diman has been a member of the Central Council of African Communities in Germany (ZAGD e.V.). Here, too, he is working hard to develop constructive ways of cooperation between Africans and Europeans.