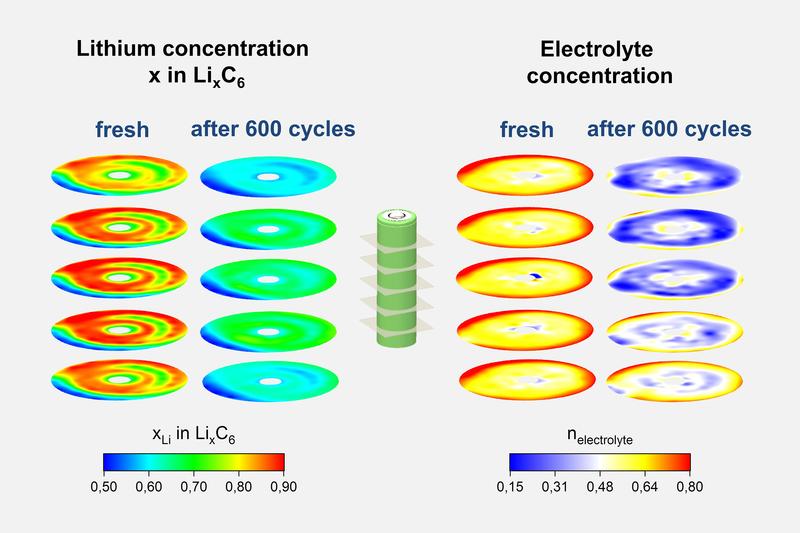 Color-coded concentration of lithium (left) and electrolyte (right) in a fresh and an aged (600 charge or discharge cycles) lithium-ion cell. Andreas Heddergott / TUM 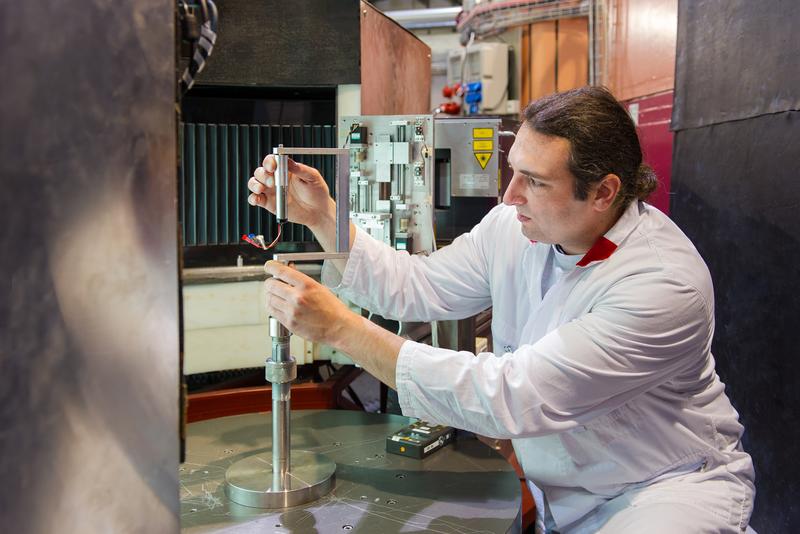 Martin Mühlbauer mounts a lithium-ion cell in the slide of the high-resolution powder diffractometer SPODI at the FRM II. Andreas Heddergott / TUM

In our smartphones, our computers and in our electric cars: We use rechargeable lithium-ion batteries everywhere. But their capacity drops after a while. Now a German-American research team has investigated the structure and functionality of these batteries using neutron diffraction: They discovered that the electrolyte fluid's decomposition products capture mobile lithium in the battery and that the distribution of lithium within the cell is surprisingly uneven.

The outstanding characteristics of the lithium-ion battery have changed our everyday lives as only very few other inventions have. However, over time various effects occur which gradually reduce the great storage capability of these batteries.

Together with other scientists he is searching for answers to fundamental questions on the structure and behavior of rechargeable lithium-ion batteries: Why does the available capacity drop over time? How is the lithium distributed in the battery?

Why use neutrons to investigate a rechargeable battery?

Observing a lithium-ion cell's interior during charging and discharging, for example the decomposition of the electrolyte or the distribution of the lithium, is very difficult from outside of the cell due to the high reactivity of the cell components with oxygen and air humidity.

Neutrons are particularly sensitive with regard to lighter elements such as hydrogen and lithium. Therefore they can render the lithium inside a cell visible, making investigations possible under actual operational conditions.

Another advantage of working with neutrons is that they can be used in non-destructive testing. Thus for example the researchers can observe internal battery processes from outside without intervening in the delicate system.

Why does battery capacity sink?

Lithium-ion cells produce electricity as lithium atoms release electrons which then flow through a connected device. At the same time, inside the cell a lithium ion moves from one electrode to the other; this means there are always only as many electrons available as there are lithium ions. When the rechargeable battery loses capacity, it can also be said that the lithium "gets lost". But where does it go?

The neutron scattering experiments at the instruments STRESS-SPEC and SPODI indicated a linear relationship between the loss of mobile lithium ions and the decomposition of the electrolyte, which occurs for example as unwanted side reaction during charging.

The products resulting from the electrolyte decomposition trap lithium atoms which are then no longer available as mobile lithium to be exchanged between the two electrodes. As a result, the battery loses capacity: It ages.

How is the lithium distributed?

Until now theoretical models, calculations and measurements usually assume an even distribution of lithium in these batteries. However, the investigations indicate that the lithium is very unevenly distributed from the very beginning; and the inhomogeneity rises over time.

Modelling of lithium-ion cells can be significantly improved when developers take this uneven lithium distribution into account. In addition, statements can be made about the storage ability of the lithium-ion cell based on the lithium distribution. These results are an important basis for making more efficient rechargeable batteries with longer service lives and higher performance in the future.

The work was funded by the Heinz Maier-Leibnitz Zentrum (MLZ), the German Research Foundation (DFG), the German Federal Ministry of Education and Research (BMBF) and the Bavaria California Technology Center (BaCaTeC), as well as by the U.S. Department of Energy, as part of its research activities on advanced battery materials.

In addition to scientists at the Heinz Maier-Leibnitz Zentrum and the Technical University of Munich Department of Physics, researchers from the Karlsruhe Institute of Technology, Iowa State University's Ames Laboratory (USA) and Lawrence Berkeley National Laboratory (USA) were also involved in the publication.

The measurements were carried out at the Heinz Maier-Leibnitz Research Neutron Source (FRM II) of the Technical University of Munich, the Institute Laue-Langevin (ILL) in Grenoble (France) and at the German Electron Synchrotron (DESY) in Hamburg.