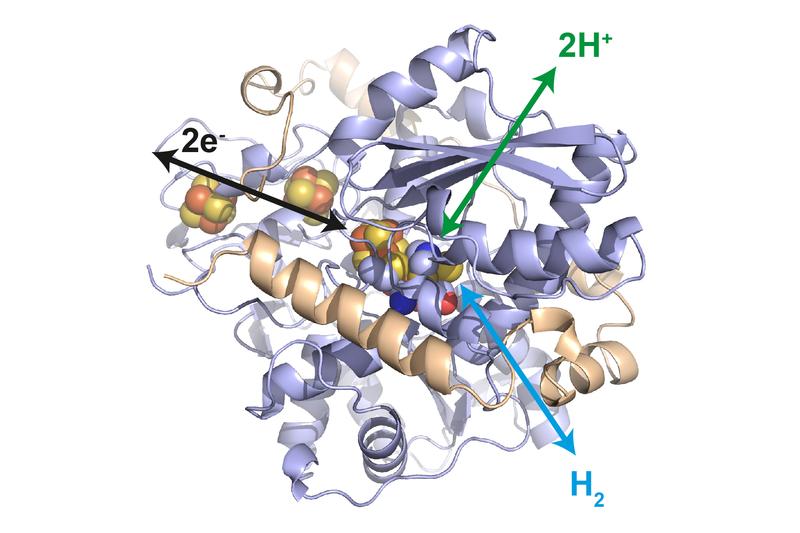 In its active center an iron-sulfur cluster catalyzes the oxidation of hydrogen to protons as well as the reduction of protons to hydrogen. Additional iron-sulfur clusters of the hydrogenase enable the electron transfer to the surrounding polymer. Dr. James Birrell / MPI CEC 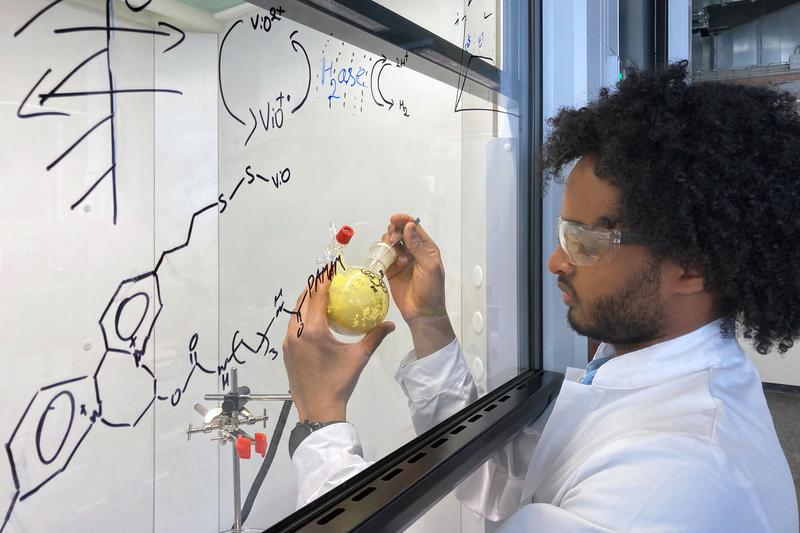 Dawit T. Filmon, scientist with Prof. Nicolas Plumere, professorship for electrobiotechnology at the TUM Campus Straubing for Biotechnology and Sustainability, holds a starting material for the polymer side chains in his hands. Jan Winter / TUM

An enzyme could make a dream come true for the energy industry: It can efficiently produce hydrogen using electricity and can also generate electricity from hydrogen. The enzyme is protected by embedding it in a polymer. An international research team with significant participation of scientists from Technical University of Munich (TUM) has presented the system in the renowned science journal Nature Catalysis.

Fuel cells turn hydrogen into electricity, while electrolysers use electricity to split water to produce hydrogen. Both need the rare and thus expensive precious metal platinum as a catalyst. Nature has created a different solution: Enzymes, referred to as hydrogenases. They catalyze the conversion of hydrogen very quickly and almost without energy loss.

However, in the past these biocatalysts were not considered suitable for industrial use because of their high sensitivity to oxygen. Now a research team from the Technical University of Munich (TUM), Ruhr-Universität Bochum (RUB), the French National Centre for Scientific Research (CNRS) in Marseille and the Max-Planck Institute for Chemical Energy Conversion has succeeded in embedding the sensitive enzymes in a protective polymer in a way that makes them viable for use in technical hydrogen conversion.

"When the sensitive hydrogenases are embedded in suitable polymers they continue to work for several weeks, even in the presence of oxygen," says Nicolas Plumeré, Professor for Electrobiotechnology at the TUM Campus Straubing for Biotechnology and Sustainability. "Without this protection they lose their activity within a matter of minutes."

Embedding the hydrogenases in polymers whose side chains can transfer electrons, referred to as redox polymers, had nevertheless two decisive disadvantages: a high level of resistance countervailed the flow of electrons through the redox polymer. This required the investment of energy which was then lost in the form of heat. And the embedded hydrogenases completely lost their ability to generate hydrogen.

With a clever selection of the right polymer side chains, the research team has now succeeded in setting the redox potential of the polymer in such a way that only a small overvoltage is necessary to overcome the resistance.

More detailed investigations then revealed that the potential of the side chains had shifted slightly to positive values due to the embedding in the polymer matrix. In a further attempt they used a side chain with a corresponding negative potential. This trick was the breakthrough: The hydrogenase was now capable of catalyzing the reaction in both directions without energy loss.

Utilizing this system the research team then built a fuel cell, in which oxygen is reduced by the enzyme bilirubin oxidase from the bacterium Myrothecium verrucaria, while the hydrogenase embedded in the polymer film oxidizes the hydrogen from the bacterium desulfovibrio desulfuricans, generating electricity in the process.

The cell achieved a value, with an open circuit voltage of 1.16 V, the highest ever measured for a system of this type and close to the thermodynamic maximum. With three milliamperes per square centimeter the cell achieved a very high power density for biological cells at the same time.

The system can also be used for the reverse reaction, producing hydrogen by consuming electrons: The energy conversion efficiency is close to 100 percent, even with power densities of over four milliamperes per square centimeter.

"The reduction in energy loss has two decisive advantages," says Nicolas Plumeré. "First, it makes the system significantly more efficient; second, the heat generated in a fuel cell stack at high performance levels would pose a problem for biological systems."

In order to make their system competitive with systems that use platinum-based catalysts, the team's ongoing research is now focused on improving the stability of the hydrogenases at higher power densities.

Furthermore, the findings can also be transferred to other highly-active but sensitive catalysts for energy conversion and electrosynthesis. Direct objectives here are primarily carbon dioxide-reducing enzymes that can use electricity to produce liquid fuels or intermediate products from carbon dioxide.

The research was funded by a Starting Grant from the European Research Council (ERC), by the French Center National de la Recherche Scientifique (CNRS) and the Aix Marseille Université, the German Research Foundation (DFG) joint funding with the Agence Nationale de la Recherche, the DFG priority program “Iron – Sulfur for Life” (SPP 1927), the Max Planck Society and in the case of the RESOLV cluster of excellence by the Federal Ministry of Education and Research (BMBF) under the Excellence Strategy of the Federal Government and the German Federal States.