Meet the Nano-Chameleon, a new contender for the title of ‘World’s Smallest Reptile’ 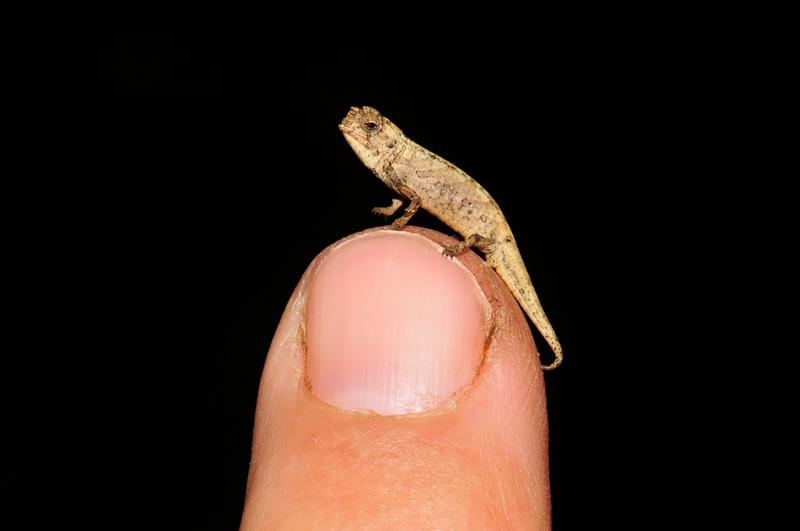 The male Nano-Chameleon (Brookesia nana) is the smallest adult reptile that has ever been found. Frank Glaw, SNSB-Zoologische Staatssammlung München 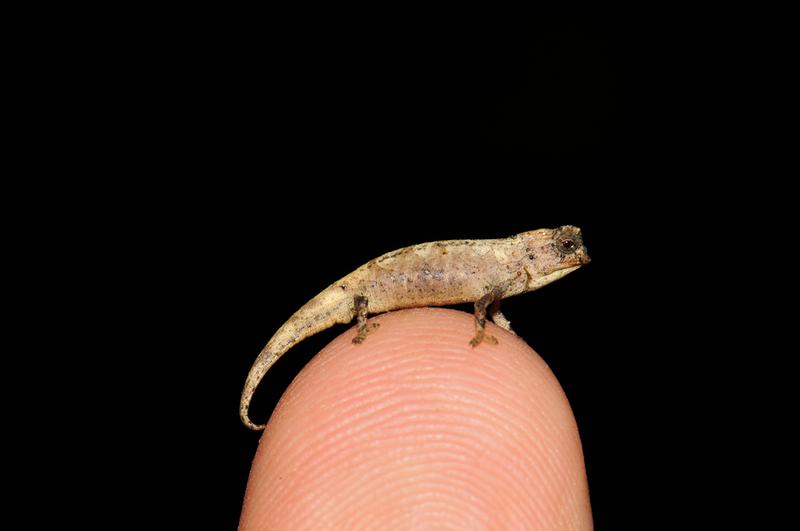 An international team, led by the Bavarian State Collection of Zoology (ZSM-SNSB), has discovered a minuscule new species of chameleon. The sole known, apparently adult male of the new species has a body size of just 13.5 mm, making it the smallest known male of the roughly 11,500 known non-avian reptiles. A comparison with 51 other chameleon species showed that the new species has exceptionally large genitals. The study was published in the open access journal Scientific Reports.

On an expedition in the North of Madagascar, a joint team of German and Malagasy scientists came across a new contender for the title of ‘world’s smallest reptile’. They have named the new species Brookesia nana. ‘At a body length of just 13.5 mm and a total length of just 22 mm including the tail, the male Nano-Chameleon is the smallest known male of all “higher vertebrates”’ says Frank Glaw, Curator of Herpetology at the Bavarian State Collection of Zoology (ZSM-SNSB) and first author on the study. The female is larger at 19 mm body length and 29 mm total length. In spite of intensive efforts, the authors were only able to find two individuals.

‘With the aid of micro-CT scans - essentially three-dimensional x-rays - we were able to identify two eggs in the female specimen, and so demonstrate that it is an adult,’ says Mark D. Scherz of the University of Potsdam. To determine the sexual maturity of the male, the team looked at its genitals, which were well-developed. These structures are called ‘hemipenes’, and, like all other reptiles and snakes, are paired, and often have features that can be used to identify species.

The team also compared the size of the male Nano-Chameleon’s hemipenes with 51 other chameleon species from Madagascar and found that the smallest chameleons tend to have the largest genitals, relative to their body size. Those of the Nano-Chameleon, for example, are 18.5% of the male’s body size, making them the fifth largest of all the studied species. The record-holder for genital size in this group is Brookesia tuberculata, however, with hemipenes that are roughly a third of the male’s body size.

A possible explanation for this phenomenon may be the substantial size difference between the males and females, so-called ‘sexual size dimorphism’. In larger chameleons, males tend to be larger than females, but in small chameleons, the reverse is true. ‘As a result, the extremely miniaturised males of the small species need relatively larger genitals, in order to successfully mate with the larger females,’ explains Miguel Vences of the Technical University of Braunschweig.

‘There are numerous extremely miniaturised vertebrates in Madagascar, including the smallest primates and some of the smallest frogs in the world, which have evolved independently,’ says Andolalao Rakotoarison of the University of Antananarivo in Madagascar. But why this species is so small remains a mystery. ‘The “island effect”, that causes species on small islands to get smaller in body size, which has been invoked for other small chameleons, does not make sense in this case, because Brookesia nana lives in the mountains on mainland Madagascar,’ adds Fanomezana Ratsoavina, likewise of the University of Antananarivo.

‘The closest relative of the new chameleon is also not the similarly tiny Brookesia micra, but instead the nearly twice as a large B. karchei, which occurs in the same mountains. That shows that this extreme miniaturisation has arisen convergently in these chameleons,’ says Jörn Köhler from the Hessische Landesmuseum in Darmstadt.

The distribution ranges of most dwarf chameleons are very small, sometimes encompassing areas of just a few hectares. So despite only two individuals being known, it is expected that Brookesia nana likewise has a very limited range. ‘Unfortunately, the habitat of the Nano-Chameleon is under heavy pressure from deforestation, but the area has recently been designated as a protected area, and hopefully that will enable this tiny new chameleon to survive,’ says Oliver Hawlitschek from the Centrum für Naturkunde in Hamburg.

Back
Biology Zoology / Agricultural and Forest Science
© Research in Bavaria