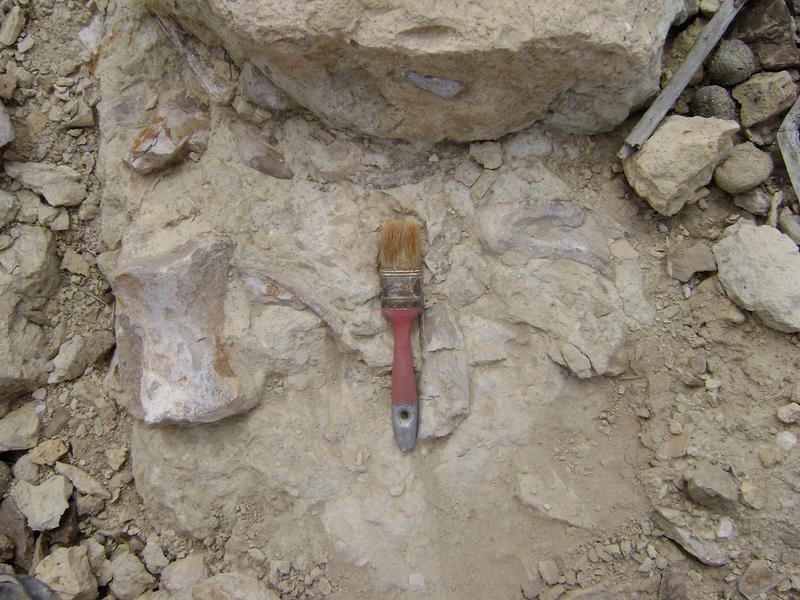 Sauropod bones in rock from a fossil site in Patagonia. Oliver Rauhut, SNSB-BSPG 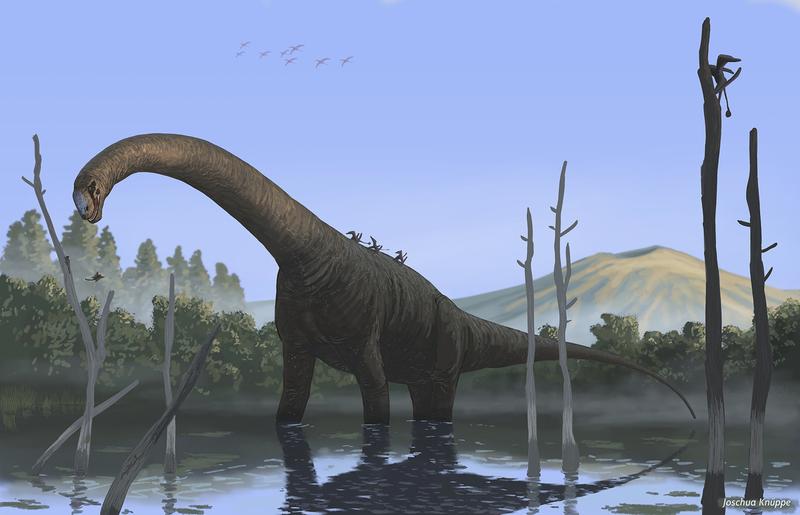 Paleontologists of the Bayerische Staatssammlung für Paläontologie und Geologie (SNSB-BSPG) examined the remains of the long-necked dinosaur Patagosaurus fariasi (175 million years) from Argentina as part of a re-description. These investigations have great significance for the understanding of sauropod evolution. The researchers published their results in the scientific journal Geodiversitas.

As its name already gives it away, the dinosaur Patagosaurus fariasi originated in what is now Patagonia, Argentina, and lived there about 175 million years ago. It belongs to the group of sauropods (long-necked dinosaurs), the largest land animals that have ever lived on Earth. Some of the best known representatives of the long-necked dinosaurs are Diplodocus or Brachiosaurus. Although not as spectacularly big as its younger cousin Patagotitan (length up to 37 meters), 14 meters long Patagosaurus plays an important role in understanding sauropod evolution.

Patagosaurus shows a mixture of basal and derived traits of more highly developed sauropods. One such derived trait is the so-called pneumatization of its vertebral bones: in the course of their evolution, the land giants developed ever lighter bones with numerous cavities in order to make their bones as light as possible. So they could become as big as, for instance, Patago-titan, the largest land animal ever lived on Earth. Comparison with other basal sauropods from the same time from different areas showed that they also already had pneumatized bones.

"The early pneumatization that Patagosaurus displays was apparently already widespread in many basal sauropods. We therefore suggest that sauropods probably were distributed worldwide even earlier than the early Middle Jurassic. Our redescription helps to better understand the interrelationships of sauropods," first author Femke Holwerda said.

The transition from the Early to the Middle Jurassic (from about 180 to about 170 million years ago) was a crucial period for the spread and evolution of dinosaurs. Already 5-10 million years later, in the Middle and Late Jurassic, sauropod dinosaurs had reached a global distribution. Unfortunately, there is not much known about the critical time interval when sauropods had their major evolutionary diversification. Argentina is one of the few places in the world where sauropod fossils from this period are found, including Patagosaurus. Since the oldest known long-necked dinosaurs are not much older, but much more incomplete than Patagosaurus, these remains are of special importance to our understanding of the evolution of this important group of dinosaurs.

The fossil was originally announced in 1979 and briefly described in 1986. The paleontologist Femke Holwerda has now re-examined and described the fossils in detail as part of her doctoral thesis at the Bayerische Staatssammlung für Paläontologie und Geologie (SNSB-BSPG) and the Ludwig-Maximilians-Universität in Munich, in collaboration with Oliver Rauhut, curator at the SNSB-BSPG, and the Argentine scientist Diego Pol (Museo Paleontológico Egidio Feruglio, Trelew). The redescription of Patagosaurus fariasi recently appeared as a monograph in the journal Geodiversitas and contains new insights into its evolutionary history and its relationships to other Early and Middle Jurassic sauropods.

However, the extensive material, originally described under the name Patagosaurus, likely contains remains of at least one other previously unknown sauropod species. The researchers therefore suspect that several species of long-necked dinosaurs existed shortly after their origin and played an important role as the largest herbivores of ecosystems at that time. This finding is consistent with the recent hypothesis that sauropods owed their success to rapid climate change toward the end of the lower Jurassic, which led to a marked change in flora and thus the extinction of earlier herbivores. This hypothesis, based on work by Diego Pol and Oliver Rauhut, was also based on remains from Patagonia - underscoring how important this region is to our understanding of dinosaur evolution.

Back
Biology Geosciences
© Research in Bavaria