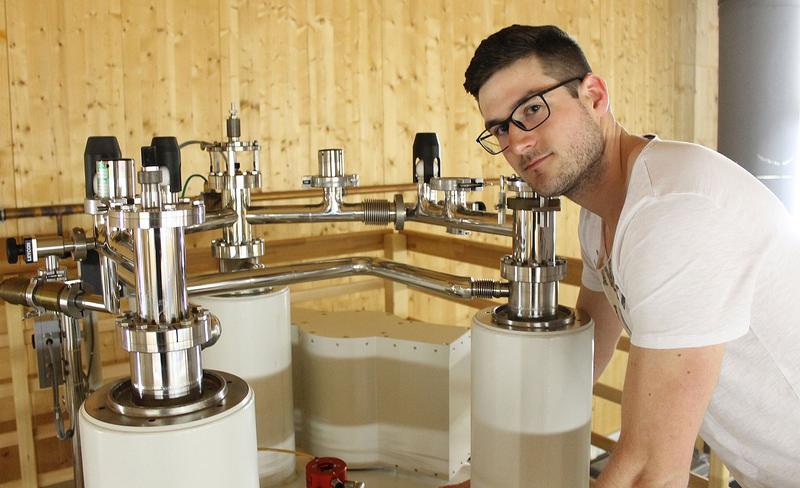 Marcel Meinhart M.Sc. at the 1-gigahertz NMR spectrometer at the University of Bayreuth, which was used in the comparative studies of the polystyrene particles. Photo: Christian Wißler.

More and more studies worldwide are looking into the effects of microplastics, especially with regard to the environment and health. They often use spherical polystyrene microparticles and have arrived at partly contradictory results. An interdisciplinary research team at the University of Bayreuth has discovered a reason for this. Commercially available, supposedly identical polystyrene particles differ significantly, depending on the manufacturer, in terms of their structure and properties. Therefore, their interactions with living cells have different consequences for cell metabolism. The scientists have presented their study in the Journal of Hazardous Materials.

The new research results were obtained using murine model cell lines as examples. "Our study impressively shows how problematic it is to make generalised statements about the health or ecological effects of microplastics. When particles of the same size and shape, and of the same polymer type, show such surprising chemical and physical differences in in-depth analyses, and when these differences affect interactions with living cells – then caution is advised against jumping to conclusions," says Prof. Dr. Christian Laforsch, spokesperson of the “SFB 1357 Microplastic” Collaborative Research Centre at the University of Bayreuth.

"Our findings contain clear indications that the polystyrene microparticles currently used in effect studies are poorly characterised. Because highly relevant differences remained undiscovered, contradictory results obtained under supposedly identical conditions have puzzled researchers. In future, we in Bayreuth will take a closer look at the microparticles used in our experiments. The replicability of experiments must be a top priority in microplastic research - especially when it comes to investigating health effects," adds Anja Ramsperger, one of the first authors of the study.

The clear differences between commercially available polystyrene particles that come from different manufacturers relate first to the monomers they contain. These basic building blocks of long-chain plastic molecules, which are linked together during the production of plastics, can have harmful effects on cells or organisms. Further differences concern the electrical charge distribution at the surface of the particles, the so-called zeta potential. The experiments were conducted within the framework of "SFB 1357 Microplastic” in laboratories at the University of Bayreuth and the Leibniz Institute of Polymer Research in Dresden. The results clearly show that when polystyrene microparticles with a higher zeta potential and a homogenous surface charge distribution are brought into contact with living cells, interactions occur far more frequently than when other polystyrene microparticles are used. In the course of frequent interactions, comparatively many particles can enter the cells. Here they impair the metabolism and proliferation of the cells - especially when particle concentrations are high.

"In the meantime, there are numerous toxicological studies seeking to get to the bottom of the effects of microplastics on living organisms. But only when we know the chemical composition and the surface properties of the particles used in detail can these studies be compared scientifically. Only on this basis will it be possible to decipher the properties that make certain types of microplastics potentially dangerous for the environment and humans," Ramsperger emphasises.

The new study is based on close interdisciplinary cooperation in the DFG Collaborative Research Centre 1357 "Microplastic" at the University of Bayreuth. The participating researchers conduct research and teach in the fields of animal ecology, biomaterials research, bioprocess technology, biophysics, and inorganic chemistry. Another research partner in the Collaborative Research Centre was the Leibniz Institute of Polymer Research in Dresden.