Old and young planets: The solar system was formed in two steps 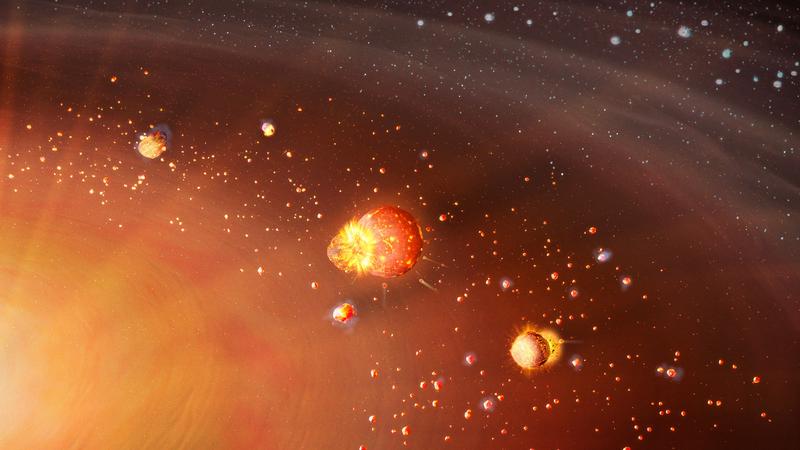 Recent findings from astronomical observations of protoplanetary disks and geochemical laboratory analyses of meteorites provide evidence that – contrary to previous assumptions – planet formation began only about 200,000 years after the formation of the young star, and occurred in isolated regions of the young solar system. The terrestrial planets such as Earth and Mars owe their relatively dry composition to the early start of their formation, while the outer planets such as Jupiter and Saturn, asteroids, and comets acquired much more volatile substances such as water during their later formation.

Astronomical observations of planet-forming disks have shown that these disks often exhibit only weak turbulence. Under these conditions, the models show that the snow line, where water transitions from the gas to the ice phase, moved from the inner to the outer reaches of the early solar system. This involved an early burst of planetesimals formation, the building blocks of planets, in the inner solar system, and another such burst later but much further out. These two formation epochs explain the early start and protracted end of planet formation in the inner solar system and the later start and more rapid completion of planet formation in the outer solar system. The two different planetesimal populations continued to collect material from the surrounding disk and via mutual collisions. However, the different times of initial formation led to different internal evolution of the nascent protoplanets.

New interpretation of the earliest formation epoch of the solar system

The early splitting of the two populations offers a plausible explanation for the isotopic dichotomy between the inner and outer solar system, as has been detected in many meteorites. The two planetary populations formed at different times and at different distances from the Sun, so only minor amounts of material from the outer solar system were incorporated into the inner terrestrial planets during later evolution, meaning the isotopic dichotomy was preserved. The models also show that during the existence of the protoplanetary disk, the accreting terrestrial planets could have effectively migrated from the original formation site of their building blocks at the snow line to their present positions in the solar system.

The comprehensive model of formation proposed by the team further makes the prediction that an early accretion dominated by mutual collisions was followed by a phase dominated by the accretion of smaller dust grains, so-called “pebbles”. “This would have had observable consequences for present-day asteroids and meteorites, both remnants of the early solar system, which we could verify using space missions and laboratory studies”, Prof. Golabek said. “Furthermore, the rapid formation of planetesimals in separate reservoirs could explain some of the ring structures discovered in recent years by radio telescopes in protoplanetary disks around particularly young stars. This theory could be explored in the future by further astronomical observations of protoplanetary disks in which new planets are currently forming. The study also shows that whether a future planet will be water-rich or water-poor can be determined very early on. This opens up new avenues for understanding the planets of our solar system in the context of the many exoplanets discovered in the galaxy, which may be very water-rich.”

Prof. Dr Gregor Golabek from the Bavarian Research Institute of Experimental Geochemistry and Geophysics at the University of Bayreuth

Prof. Dr. Gregor Golabek is co-author of the study. At the moment, the geophysicist is working mainly on the early thermomechanical evolution of terrestrial planets. “The study of planet formation and its early evolution is an exciting task in my opinion, as data and models from disciplines as diverse as astrophysics, geochemistry, and rock physics can be combined with computational geodynamics to gain a better understanding of the processes that shaped the early solar system”, says Golabek. BGI at the University of Bayreuth conducts experimental high-temperature/high-pressure research in the fields of mineralogy, petrology, geochemistry, and geophysics. Studies on the structure, composition, and dynamics of the Earth's interior increase our understanding of rock-forming processes.

This research was supported by funding from the Simons Collaboration on the Origins of Life, the Swiss National Science Foundation, and the European Research Council.

The formation of the solar system in two distinct planetary populations. The inner terrestrial protoplanets began to form early, inherited a significant amount of radioactive aluminium-26, therefore melted, formed iron cores, and rapidly degassed their original volatile content. The outer solar system planets began to form much later and further out, with less radiogenic heating, and therefore retained most of their original accreted volatiles.

The use of the illustration is free of charge if the author is acknowledged.

Back
Geosciences Physics / Astronomy University of Bayreuth
© Research in Bavaria