Pair of galaxy clusters in a wide, warm web of gas 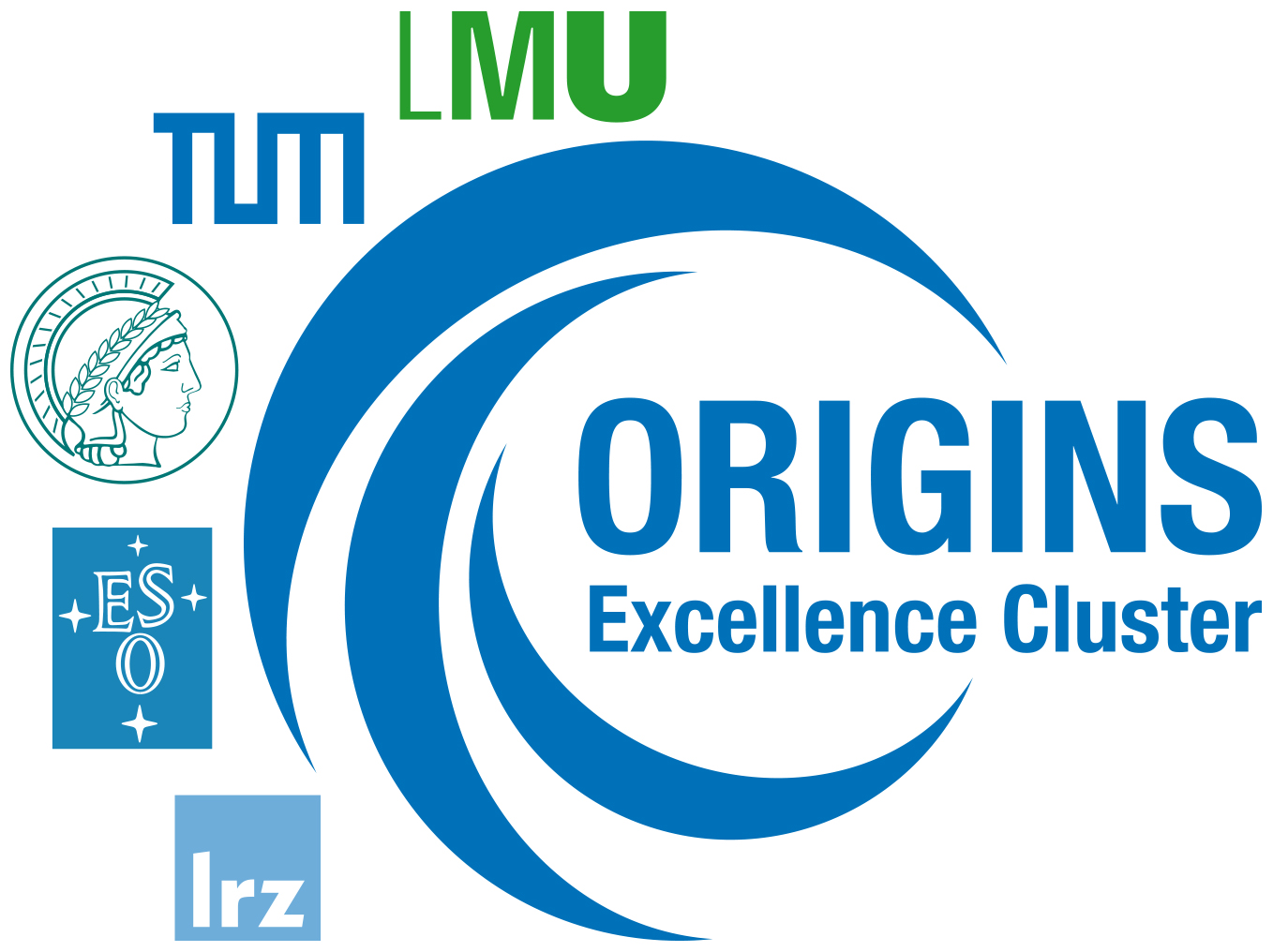 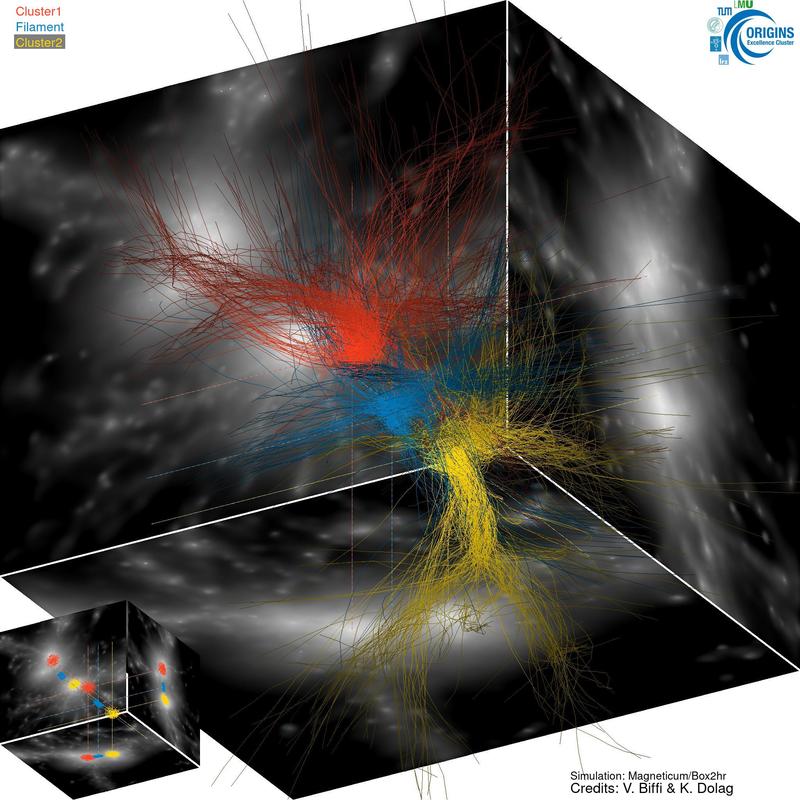 A region from the Magneticum simulation analogous to the A3391/95 system. The different lines show how material within the two clusters (red and gold) and the bridge (blue) in between was assembled within the last ten billion years. V. Biffi und K. Dolag (LMU) 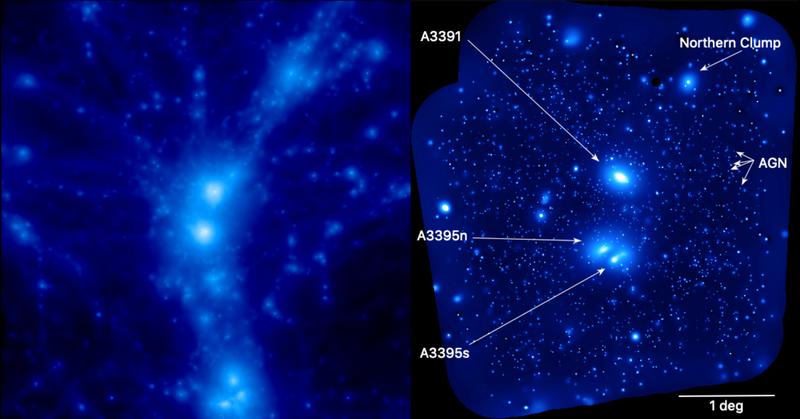 More than half of the matter in our Universe has so far eluded our view. Astrophysicists have predicted however where it might be: in so-called filaments, unimaginably long structures made of hot gas that surround and connect galaxies and galaxy clusters. These filaments of hot gas in the computer simulations by Dr. Veronica Biffi and PD Dr. Klaus Dolag at the ORIGINS Cluster of Excellence are strikingly similar in their structure to the 50 million light years long filament which has now been observed for the first time by a team led by the University of Bonn using the eROSITA space telescope.

We owe our existence to a tiny irregularity. Almost exactly 13.82 billion years ago, everything started with a "Big Bang": the beginning of space and time, but also of all matter that makes up our Universe today. This was initially concentrated at one point, but expanded at breakneck speed to a gigantic gas cloud in which matter was almost uniformly distributed — almost, but not completely. In some places the cloud was somewhat denser than in others, and this alone is why there are planets, stars and galaxies today: the denser regions exerted somewhat stronger gravitational forces, drawing in the gas from their surroundings. In this way, a complex, large-scale structure started to appear, with more and more matter concentrated in walls, filaments and crossing points, whereas the space in between became emptier and emptier — all in all resembling a sponge. Thus, within the last 13 billion years, the large-scale structure in our Universe developed in a manner whereby galaxies are clustered together in a small space, so-called galaxy clusters, connected by fine, spiderweb-like filamentary structures and large "holes" without matter therein.

A fine web of gas filaments

If our Universe really evolved in that way, the galaxies and clusters would still be connected by remnants of this gas, like the thin threads of a spiderweb. According to theoretical predictions, this is expected to contain more than half of all baryonic matter. Nevertheless, it has so far escaped our sight due to its extreme diluteness of a mere ten particles per cubic meter — much less than what we can reach with the best vacuum experiment on Earth. Latest observations of Reiprich et al, however, using the eROSITA space telescope, reveal the gas comprehensively for the first time. eROSITA is an x-ray telescope whose detectors are particularly sensitive to the type of x-rays emitted by the gas in cosmic filaments. Its large field of view images a relatively large part of the sky in a single measurement, and at a very high resolution. As a result, detailed images of objects as large as the filaments can be taken in a relatively short time.

Interpretation and confirmation from cosmological simulations

In their study the scientists examined a celestial object called Abell 3391/95. This is a system of three galaxy clusters which is about 700 million light-years away from us. The eROSITA images reveal not only the clusters and numerous individual galaxies, but also the gas filaments that connect these structures. The entire filament is 50 million light years long and a smaller filament appears to “bridge” the two main portions of the Abell 3391/95 system.

“The new eROSITA images of the observed system resemble remarkably the outcome of our cosmological simulations” explains PD Dr. Dolag. In the Magneticum simulations developed by their group at the University Observatory Munich, Dr. Biffi and PD Dr. Dolag found a very similar pair of galaxy clusters connected by warm gas in a bridge-like filament and surrounded by other objects, aligned in a much wider filamentary structure that spans a region of 15 megaparsecs. The computer simulations confirm that such long filaments contain a substantial amount of diluted gas and extend over large regions of space. "Our simulations also show that other groups and clusters of galaxies move along the filaments, towards the cosmic web knots such as the one where the A3391/95 analog resides," the scientists explain. These studies can uniquely help to interpret the origin of the observed pair and filament, and the particular properties of the gas in them: "the extremely dilute and colder gas in the filament seems to come from very different directions, almost orthogonal, with respect to the hotter gas within the galaxy clusters," explains Dr. Biffi, "and the evolution of its properties over the last ten billion years is also different."