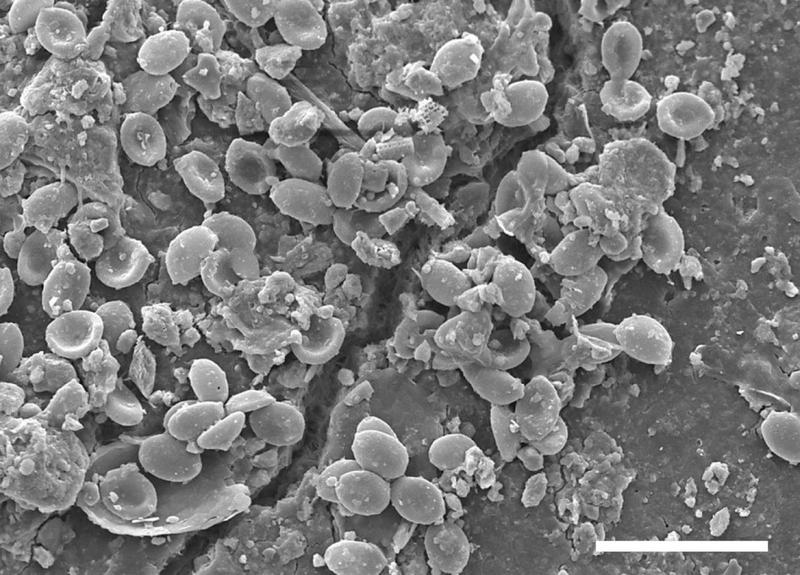 The image from a scanning electron microscope shows fungal spores along a crack in a microplastic particle. The scale bar corresponds to 30 micrometers. Image: UBT / Dept. of Mycology 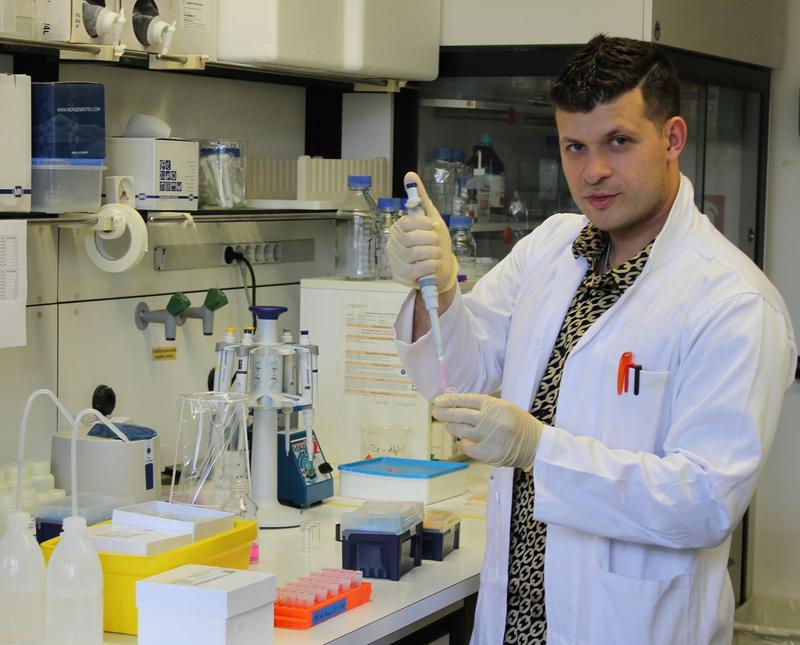 Gerasimos Gkoutselis M.Sc., first author of the new study, in a laboratory at the Department of Mycology at the University of Bayreuth. Photo: Christian Wißler.

Representatives of numerous pathogenic fungal species are finding new habitat on microplastic particles in the soil and could thus be one of the possible causes of an increase in fungal infections. Researchers from Bayreuth, Hannover and Munich demonstrated this in a new study. Using high-throughput methods, the scientists analysed fungal communities from soil samples taken from sites near human settlements in western Kenya. The findings of this research have been published in the journal Scientific Reports.

This study is the first to focus on fungal communities on microplastic particles in the soil. Many of the species detected belong to groups of fungi that are pathogenic to plants, animals and humans. Pathogenic microfungi are able to colonize the otherwise inhospitable surfaces of microplastic particles due to their characteristic adhesive lifestyle. Furthermore, they are able to withstand strong solar radiation and heat to which they are exposed on soil surfaces.

"We were able to observe all stages of fungal biofilm formation on the microplastic particles recovered from the soil samples. In doing so, we were able to demonstrate that fungi not only grow, but also reproduce in the so-called plastisphere. The data we obtained from microscopic examinations and DNA analyses supports the assumption that fungi systematically colonize microplastics in the soil. Moreover, they provide evidence that microplastics in soil accumulate certain pathogenic fungal species: some species dangerous to humans, including black fungi and cryptococcal yeast fungi, are present on the surfaces of microplastic particles in higher concentrations than in the surrounding soil. Our study therefore justifies the presumption that microplastics in soil are a potential source of fungal infections," says Gerasimos Gkoutselis M.Sc., lead author of the study and doctoral student at the University of Bayreuth’s Department of Mycology.

Especially in tropical countries, the risk of microplastic in the soil becoming a carrier for pathogenic fungi is comparatively high. The microplastic-containing soil samples examined in this new study were collected from study sites in the west Kenyan town of Siaya. The sites included a marketplace, a dump site, a roadside, and a courtyard. "Even though plastic waste is often portrayed as a Third World problem, Kenya actually has pioneer status in plastic waste prevention. Since 2017, effective measures have been taken there to eliminate single-use plastic. Kenya has also joined an alliance to impede import plastic from industrialised countries. This means that measures have been taken at an early stage to counteract the problem of plastic waste in the environment. The fact that we discovered numerous potentially pathogenic fungal colonies in the soil samples from Kenya is a clear indication of the urgency of the problem in tropical regions in general, where the rate of fungal infections is already high. Worldwide, fungal infections are on the rise. Our study shows: Measures to prevent plastic waste from entering the environment and to further develop waste management are urgently needed globally," Prof. Rambold explains further.

The findings published in Scientific Reports are the result of close interdisciplinary cooperation between scientists at the University of Bayreuth and partners at Leibniz University Hanover and Ludwig Maximilian University of Munich. The interdisciplinary working group at the University of Bayreuth is part of the local DFG Collaborative Research Centre 1357 "Microplastics". Scientists from the fields of mycology, microbiology, biogeochemistry, and genetics are working together in this team to investigate the interaction of microplastics and microorganisms living in the ground.