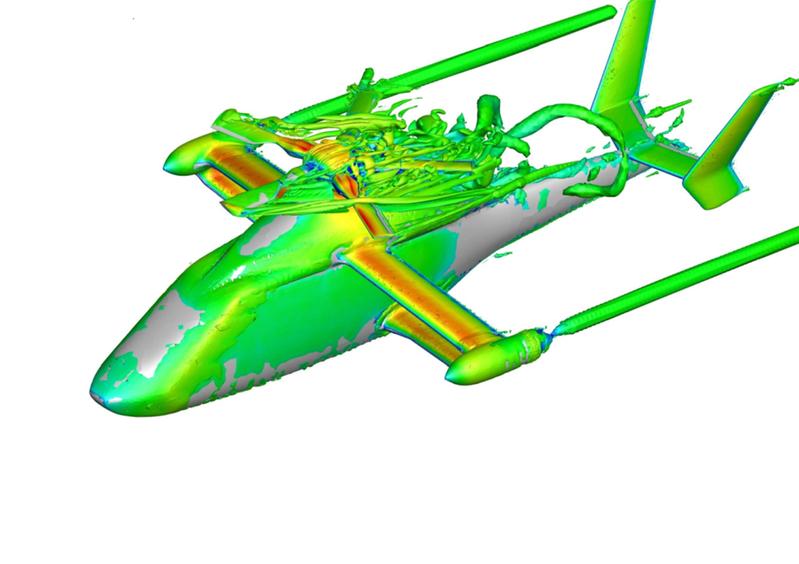 Visualization of turbulent structures in the vicinity of the rotor head. TUM, TUM

Helicopters are to become faster, greener and quieter. An international team led by Airbus Helicopters (AH) is working on the technology to achieve these goals with the RACER demonstrator. Scientists from the Technical University of Munich (TUM) have designed an aerodynamically shape-optimized rotor head full fairing for the innovative RACER rotorcraft. The fairing will reduce energy consumption and make higher speeds possible.

Vertical take-off and landing aircraft are essential whenever there's not enough room for runways, for example in mountain rescue missions, flights to oil platforms or when providing medical services to remote areas. But conventional helicopters consume more energy and achieve lower speeds in forward flight than fixed-wing aircraft. This is because the helicopter requires a rotor for vertical take-off and landing and to maintain a steady position in the air; however, the rotor has high aerodynamic drag when cruising.

With the Airbus demonstrator RACER (Rapid And Cost-Effective Rotorcraft), scientists are working to develop an aircraft that can reach a speed of 400 kilometers per hour in forward flight and which is in addition quieter and greener than existing helicopters. The innovative RACER not only has a rotor, but also features wings like an airplane in order to generate aerodynamically efficient lift and to reduce the load on the rotor.

The aerodynamics of the rotorcraft play a significant role in achieving the high cruising speed. In the FURADO project (Full Fairing Rotor Head Aerodynamic Design Optimization) TUM researchers working together with AH have developed an aerodynamic fairing for the rotor head. "The fuselage and the rotor head are the components that cause the most drag when the helicopter is cruising," says Patrick Pölzlbauer, research associate at the TUM Chair of Aerodynamics and Fluid Mechanics. Although geometries have already been developed which reduce fuselage drag to the greatest extent possible, until now there has been no aerodynamically optimized full fairing for the rotor head.

The reason: The aerodynamics of the rotor are highly complex. Its rotational movement results in permanently changing inflow conditions for the rotor blades. Here what is referred to as attached flow occurs, a flow following the contour of the object as is the case for example with a wing while cruising; this is accompanied by what's called separated flow, which has a particularly high level of drag.

"A separated flow arises when for example the contour of the body features a distinct edge, such as the blunt rear end of a car," explains Prof. Christian Breitsamter. "Then the flow is disrupted, resulting in turbulence. This is for example how dirt particles land on the rear end of the car." This kind of blunt edge is also found at the interface to the rotor blades.

The Chair of Aerodynamics and Fluid Mechanics simulates this kind of complex aerodynamic process with modern software and calculation methods. But the researchers can't rely on technology alone. "There are many parameters and settings in the flow simulation which have to be chosen correctly in order to arrive at a reliable result. And that calls for a lot of expertise and experience," says Breitsamter.

Patrick Pölzlbauer successfully designed the shape of the rotor head in such a way that the flow stays attached as long as possible and only minor turbulence arises. During the project he developed an optimization chain for the aerodynamic design of geometries which can theoretically also be used in the development of fairings for other rotor models.

"There are plans to produce the developed rotor head fairing and to test it on the flight demonstrator," adds Pölzlbauer. The scientists are eagerly awaiting the first RACER flight tests, which will finally show whether or not the real aerodynamic improvements really produce the simulated results.

FURADO is a part of the EU's Clean Sky 2 program. The objective of the research program is to promote technological developments for greener aviation.