Safe high-tech batteries for electric cars and laptops: New joint project at the University of Bayreuth 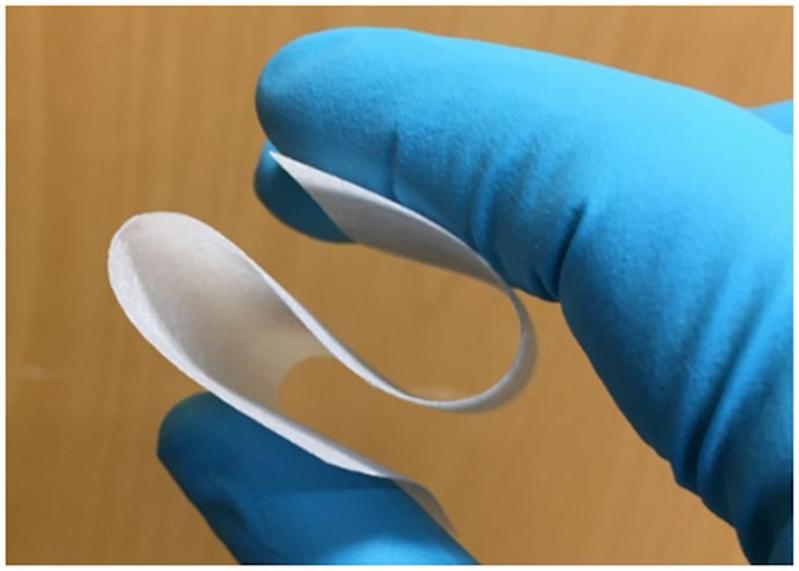 Glass separator for lithium-ion batteries developed at the University of Bayreuth. For large-scale use, its thickness must be significantly reduced. Photo: UBT/Uli Schadeck.

Lithium-ion batteries are currently the most important category of electrical energy storage device. Their operational safety depends crucially on separators that ensure the spatial separation of the electrodes. With the aim of further increasing the safety of high-tech batteries, and at the same time extending their service life, the University of Bayreuth is set to develop novel separators made of glass together with renowned industrial partners. The joint project "Glass separators for lithium-ion batteries (GlasSeLIB)" will start on March 1, 2021 and will be funded by the Bavarian Research Foundation to the tune of more than € 375,000 over the next three years.

The new separators envisaged are filigree glass membranes. Unlike previous separators, they have excellent temperature resistance of at least 500 degrees Celsius. With their help, it will be possible to further increase the operational reliability of batteries in electric vehicles, laptops, smartphones, and numerous other high-tech applications. At the same time, the new separators should slow down the aging of battery cells. To achieve this, a special glass composition must be developed characterized by high chemical activity. However, these advantages can only be achieved if extremely thin membranes can be produced. "Reducing the glass membranes to less than 20 micrometres in thickness is a major manufacturing challenge for us. But it is imperative to ensure that the operational reliability of batteries increases, or is at least maintained, if future innovations are to significantly increase their performance - for example, their storage capacity," says project leader Prof Dr.-Ing. Thorsten Gerdes from Keylab Glass Technology.

To ensure that the glass membranes developed in Bayreuth actually meet the demands placed on them, they are being tested in the laboratories of industrial partners Varta and Tesla. "Our close cooperation in this joint project is aimed at ensuring that, within three years, we will have novel separators that guarantee the operationally reliable use of lithium-ion batteries in high-tech electronics," says Gerdes.

Up to now, microporous polymer films have generally been used in lithium-ion batteries as separators, which quickly become unstable when the cell overheats. Moreover, their ionic conductivity in the electrolyte is quite low. In order to keep extending the usage times of portable end devices, or to increase the range of electric vehicles, battery cell manufacturers are now being forced to increase the proportion of chemically active materials and hence to reduce the proportion of chemically passive materials in their batteries. This is problematic, however, if - as in the case of the polymer films - safety-relevant materials are involved. However, the resulting risks could be avoided from the outset if thin glass membranes were to replace polymer films. If the project is successful, the new glass membranes will make lithium-ion batteries even safer and more powerful.