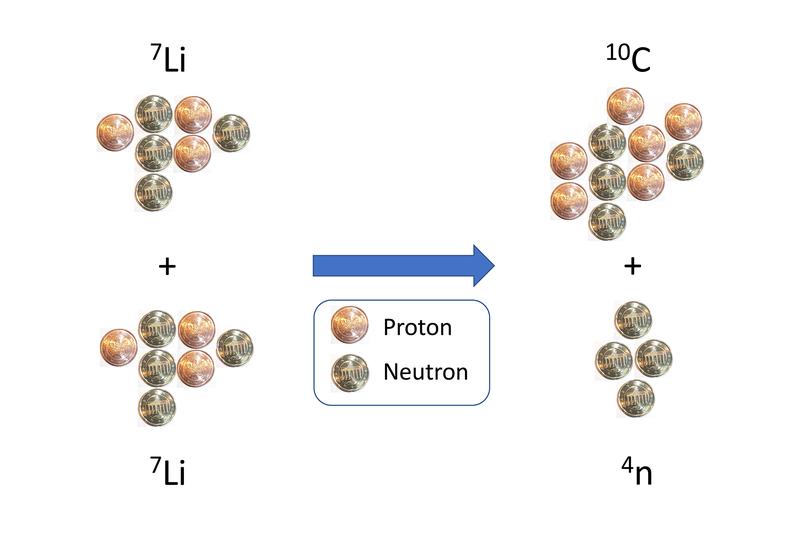 Schematic representation of the reaction from lithium-7 to carbon-10 and the long-sought tetra-neutron. Thomas Faestermann / TUM 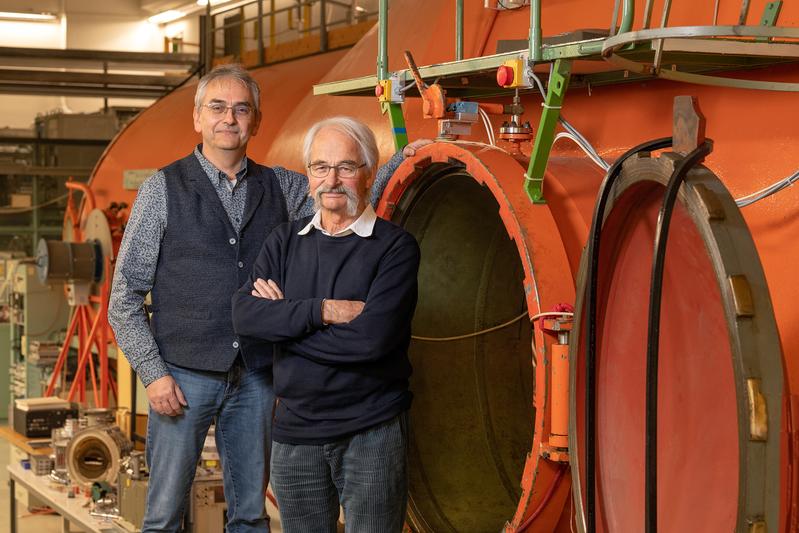 While all atomic nuclei except hydrogen are composed of protons and neutrons, physicists have been searching for a particle consisting of two, three or four neutrons for over half a century. Experiments by a team of physicists of the Technical University of Munich (TUM) at the accelerator laboratory on the Garching research campus now indicate that a particle comprising four bound neutrons may well exist.

While nuclear physicists agree that there are no systems in the universe made of only protons, they have been searching for particles comprising two, three or four neutrons for more than 50 years.

Should such a particle exist, parts of the theory of the strong interaction would need to be rethought. In addition, studying these particles in more detail could help us better understand the properties of neutron stars.

"The strong interaction is literally the force that holds the world together at its core. Atoms heavier than hydrogen would be unthinkable without it," says Dr. Thomas Faestermann, who directed the experiments.

Everything now points to the fact that precisely these kinds of particles were created in one of the last experiments carried out at the now decommissioned tandem Van de Graaff particle accelerator on the Garching research campus.

The long search for the tetra-neutron

As early as 20 years ago, a French research group published measurements that they interpreted as the signature of the sought-after tetra-neutron. However, later work by other groups showed that the methodology used could not prove the existence of a tetra-neutron.

In 2016, a group in Japan attempted to produce tetra-neutrons from helium-4 by bombarding it with a beam of radioactive helium-8 particles. This reaction should produce beryllium-8. In fact, they were able to detect four such atoms. From their measurement results, the researchers concluded that the tetra-neutron was unbound and quickly decayed back into four neutrons.

In their experiments, Faestermann and his team bombarded a lithium-7 target with lithium-7 particles accelerated to about 12 percent of the speed of light. In addition to the tetra-neutron, this should produce carbon-10. And indeed, the physicists succeeded in detecting this species. A repetition confirmed the result.

The team's measurement results matched the signature that would be expected from carbon-10 in its first excited state and a tetra-neutron bound by 0.42 megaelectronvolts (MeV). According to the measurements the tetra-neutron would be roughly as stable as the neutron itself. It would then decay by beta-decay with a half-life of 450 seconds. "For us, this is the only physically plausible explanation of the measured values in all respects," explains Dr. Thomas Faestermann.

With their measurements, the team achieves a certainty of well over 99.7 percent, or 3 sigma. But in physics, the existence a particle is only considered conclusively proven once a certainty of 5 sigma is achieved. Thus, the researchers are now eagerly awaiting independent confirmation.