Topolectrical circuits: A new direction of topological research is ready for take off 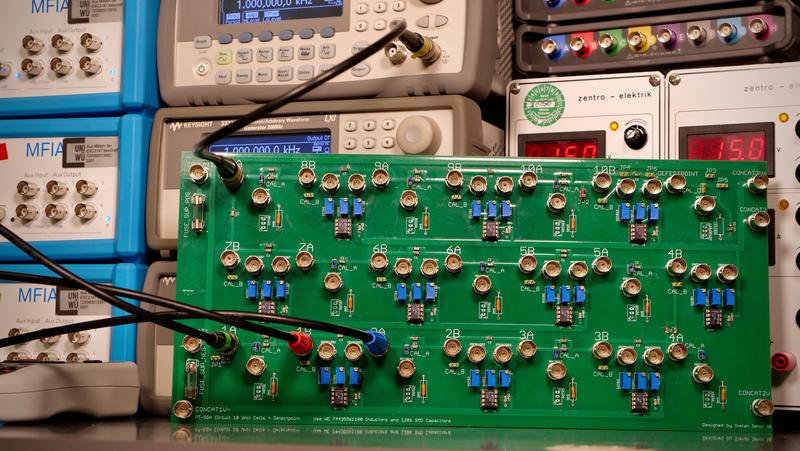 Through a recently developed experimental platform, topological matter can be realized in a fast, cost efficient, and versatile way. It was only about two years ago that researchers of the Cluster of Excellence ct.qmat–Complexity and Topology in Quantum Matter realized "Topolectric Circuits" and did important pioneering work on their conceptualization for synthetic topological matter. Another breakthrough has now been achieved by the team led by Würzburg physicist Prof. Dr. Ronny Thomale as they have observed topological phenomena in a circuit system with gain and loss. The theoretical foundation for non-Hermitian topology might enable optronic technologies in the long run.

In a joint effort, ct.qmat scientists from Dresden, Rostock, and Würzburg have accomplished non-Hermitian topological states of matter in topolectric circuits. The latter acronym refers to topological and electrical, giving a name to the realization of synthetic topological matter in electric circuit networks. The main motif of topological matter is its role in hosting particularly stable and robust features immune to local perturbations, which might be a pivotal ingredient for future quantum technologies. The current ct.qmat results promise a knowledge transfer from electric circuits to alternative optical platforms, and have just been published in Physical Review Letters.

At the center of the currently reported work is the circuit realization of parity-time (PT) symmetry, as it has been previously intensely studied in optics. The ct.qmat team have employed the PT symmetry to still make the open circuit system with gain and loss share a large amount of features with an isolated system. This is a core insight in order to design topological defect states in a compensatingly dissipative and accumulative setting. It is accomplished through non-Hermitian PT topolectric circuits.

“This research project has enabled us to create a joint team effort between all locations of the Cluster of Excellence ct.qmat towards topological matter. Topolectric circuits create an experimental and theoretical inspiration for new avenues of topological matter, and might have a particular bearing on future applications in photonics. The flexibility, cost-efficiency, and versatility of topolectric circuits is unprecedented, and might constitute a paradigm change in the field of synthetic topological matter”, summarizes the Würzburg scientist and study director Ronny Thomale.

Having built a one-dimensional version of a PT symmetry topolectric circuit with a linear dimension of 30 unit cells, the next step towards technology envisioned by the research team is to take on PT symmetric circuits in two dimensions and as such about 1000 coupled circuit unit cells. Eventually, the insight gained through topolectric circuits may establish one milestone that could make light-controlled computers possible. They would be much faster and more energy-efficient than today's electron-controlled models.

Besides the cluster members based at Julius-Maximilians-Universität Würzburg (JMU) and the Leibnitz Institute for Solid State and Materials Research Dresden (IFW), the scientists around Professor Alexander Szameit from the University of Rostock are also involved in the publication. The Cluster of Excellence ct.qmat cooperates with Szameit's group in the field of topological photonics.

The Cluster of Excellence ct.qmat - Complexity and Topology in Quantum Matter is a joint research collaboration by the Julius-Maximilians- Universität Würzburg and the Technische Universität (TU) Dresden since 2019. More than 250 scientists from 33 countries and four continents perform research on topological quantum materials that reveal surprising phenomena under extreme conditions such as ultra-low temperature, high pressure, or strong magnetic field. Making these special properties usable under everyday conditions will be the basis for revolutionary quantum chips and new types of technical applications. The Cluster of Excellence is funded within Excellence Strategy of the federal and state governments.