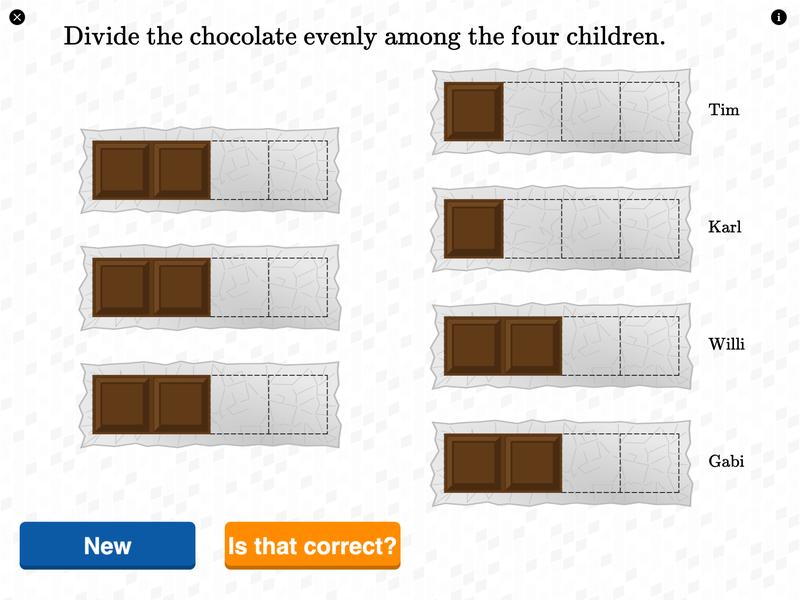 Low-achieving pupils benefit more in mathematics lessons from learning materials on tablet PCs than high-achieving children. They are obviously helped by individualized learning paths, immediate feedback and the hands-on processing of interactive content. This conclusion was reached in a study conducted by the Technical University of Munich (TUM) with sixth-grade students. The team of researchers has developed an eBook for learning fractions, which is available free of charge in English, Spanish and German.

Fractions are considered one of the most challenging topics in mathematics classes for younger children. Many pupils have difficulty gaining a clear grasp of fractions, which are less accessible in many ways than natural numbers. For example, they have trouble seeing that eight ninths is less than seven sixths or understanding that, with multiplication, the result is not always greater than the initial number.

In general, educational research assumes that pictures of everyday objects such as a pizza cut into several slices are helpful for children. To use such visualizations to achieve a deeper understanding of fractions, digital media offer far more possibilities than traditional learning materials. However, there is debate as to how much the lessons can focus on this approach without neglecting the teaching of “actual” arithmetic skills. Second, there have been few empirical studies on the use of computers in real mathematics instruction.

90 tasks on the touchscreen

To address this gap, a team of researchers at the Technical University of Munich (TUM) has now developed a tablet-based sixth-grade fractions textbook that focuses on a more intuitive concept of fractions by working with visual representations. All 90 tasks can be completed via touchscreen, including handwriting recognition functionality. This allows for “hands-on” interaction, for example when children move pizza slices around the screen. The software provides feedback and adjusts the difficulty level based on user performance.

To study the effectiveness of the digital school book, the team split around 1000 pupils from 45 classes at German schools into three groups. The first group worked with the eBook, the second with a paper version of the developed materials, and the third used conventional textbooks. The children’s skills were assessed before and after the approximately 15 hours of instruction. This made it possible to investigate the impact on low and high-achieving pupils. For analysis purposes, a statistical method was used that indicates the probability of getting a correct answer.

The analysis of the tests for low-achieving pupils shows that the tablet group scored significantly better results than the other two groups. This was true not only for tasks with visual representations of fractions. Children using the eBook also proved more competent with conventional arithmetic questions. The probability of a low-achieving pupil getting a correct answer to such a question of average difficulty was 20 percent, as compared with just 13 percent in the two other groups.

“The common concern that concentrating on a more intuitive understanding of numbers prevents or delays the acquisition of arithmetic skills proved unfounded,” says Dr. Frank Reinhold, who is conducting research at the Freiburg University of Education today. “On the contrary, we see a positive influence on pupils’ skills in fractional arithmetic.”

The high-achieving pupils presented a different picture. The children who worked with the newly developed material performed better than the textbook group in tasks where fractions were presented visually. However, it made no difference whether they worked with the tablet (Group 1) or the paper version (Group 2). There was no significant difference with regard to conventional arithmetic tasks. The pupils in all three groups had a probability of around 75 percent for getting a correct answer on such questions.

“It is thus mainly the low-achieving pupils who benefit from working with the eBook in mathematics class. In the challenging task of learning fractions, it obviously helps them when the level of difficulty is adapted to their learning pace and that they receive immediate feedback. In addition, it may be beneficial in terms of learning psychology to work with representations of numbers in hands-on activities,” says Prof. Kristina Reiss of the Chair of Mathematics Education at TUM. “The study thus offers hints on where the introduction of tablets with well designed learning materials can deliver especially large benefits.”

TUM has made the digital textbook “Fractions. Getting in touch with rational numbers” available online in German, English and Spanish. It can be accessed free of charge and with no registration at https://www.alice.edu.tum.de.

In a new follow-up project, student teachers at TUM will support pupils with the eBook. This will test how prospective teachers learn to use the digital materials in the classroom.

The “ALICE:Bruchrechnen” projects was carried out with the participation of the Heinz Nixdorf Chair of Mathematics Education (Prof. Kristina Reiss) and the Chair of Geometry and Visualization (Prof. Jürgen Richter-Gebert) at TUM. It was funded by the Heinz Nixdorf Foundation. The project “ALICE: Mathematiklernen gemeinsam unterstützen” is being funded by the SWM Educational Foundation.

Free eBook: “Fractions. Getting in touch with rational numbers”: https://www.alice.edu.tum.de