2021 Isotope Award goes to graduate of the University of Bayreuth 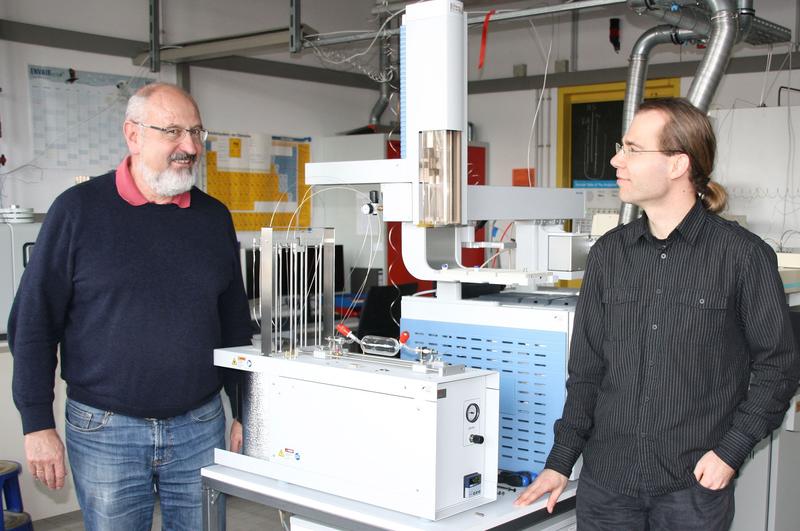 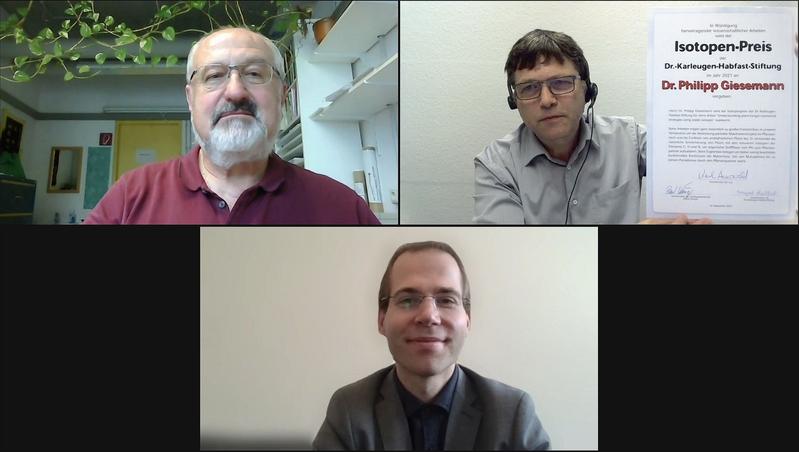 Screenshot of the awarding of the Isotope Prize to Dr. Philipp Giesemann (below). Prof. Dr. Gerhard Gebauer (top left) gave the laudatory speech. The certificate is shown by Dr. Paul Königer, Chairman of the German Association of Stable Isotope Research. (c) Ogarit Uhlmann.

Dr. Philipp Giesemann has been awarded the Isotope Prize of the Dr. Karleugen Habfast Foundation for his research work in the field of ecology and environmental research in Bayreuth. The foundation awards this prize every two years for outstanding research work in the field of "Application of Stable Isotopes". The awarding of the prize, which is endowed with € 3,000, took place during the virtual annual meeting of the German Association of Stable Isotope Research 2021.

"It is a widespread but hitherto little-noticed phenomenon in nature that plants obtain vital nutrients in part from other organisms, especially from fungi, and thus do not feed themselves independently. Dr. Philipp Giesemann's research has significantly expanded our understanding of these processes. He has used the natural enrichment of fungi with the heavy stable isotopes of carbon, hydrogen, and nitrogen to elucidate organic nutrient fluxes between fungi and plants in the soil. His research results show diverse forms of subterranean networking, ranging from equal partnerships between fungi and plants to plant parasitism at the expense of fungal partners," says Prof. Dr. Gerhard Gebauer, Head of the Laboratory of Isotope Biogeochemistry at the Bayreuth Centre of Ecology & Environmental Research (BayCEER) - a central research institution of the University of Bayreuth.

Dr. Philipp Giesemann studied for a master's degree in Biodiversity & Ecology at the University of Bayreuth from 2014 to 2016. His dissertation, completed in February 2021, was supervised by Prof. Gebauer and funded by a doctoral scholarship from Elite Network Bavaria. Since completing his doctorate, Giesemann is working as a project manager at the Joachim Herz Foundation in Hamburg, which is dedicated to promoting education, science, and research in the natural and economic sciences. Already in 2009, Bayreuth graduate Dr. Stefanie Goldberg received the Isotope Award of the Dr. Karleugen Habfast Foundation for her research work in the Laboratory of Isotope Biogeochemistry. She now holds a research professorship at the Chinese Academy of Sciences in Kunming.

Since June 2021, isotope research at the University of Bayreuth has been strengthened by an interdisciplinary central laboratory, the Bayreuth Centre for Stable Isotopes in Ecology & Biogeochemistry (BayCenSI), integrated in BayCEER. The German Research Foundation (DFG) is funding the new facility from its Core Facilities programme with a total of € 560,000 for three years. The use of stable isotopes has become increasingly important in ecology and environmental research in recent years. It has led to important new findings, for example on food webs, carbon and nutrient cycles, and anthropogenic pressures in ecosystems.