More diversity for our farms and forks 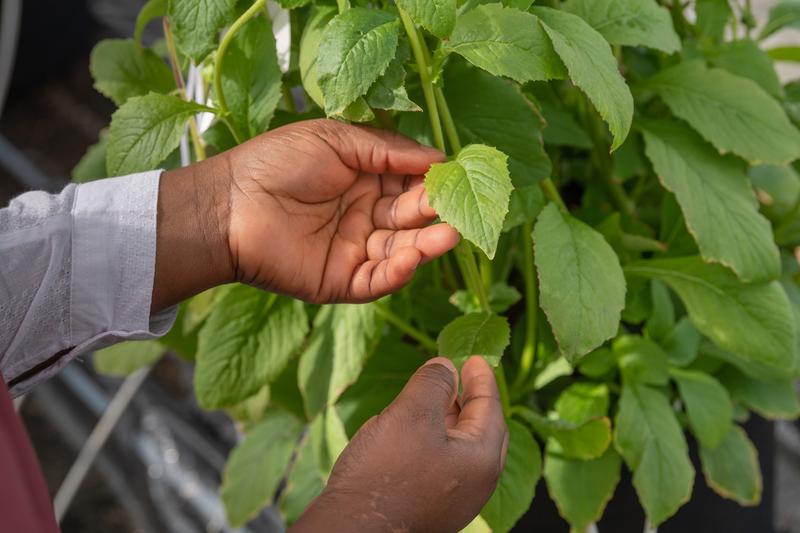 Ebolo (Crassocephalum crepidioides), which is used for example in soups, stews and salads, is still mainly collected from the wild. A. Heddergott / TUM, Free for use in reporting on TUM, with the copyright noted. 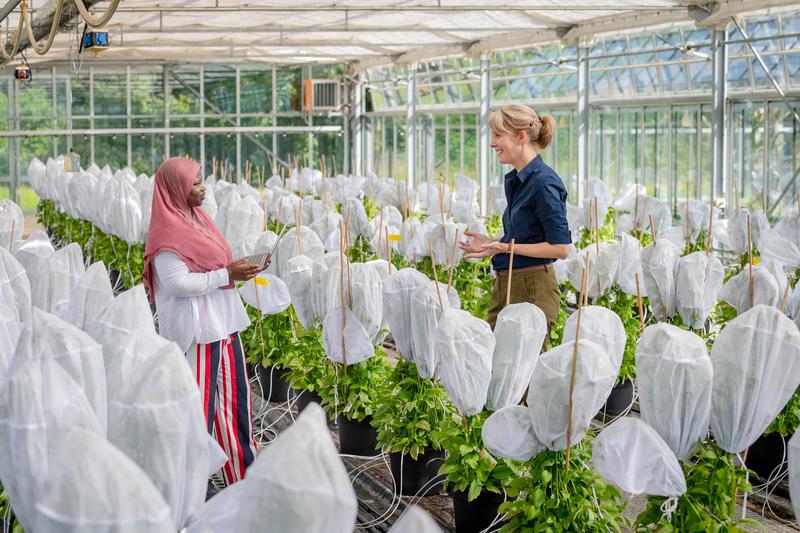 Prof. Brigitte Poppenberger and her doctoral student, Adebimpe Adedeji-Badmus, surrounded by Ebolo plants in a greenhouse of the TUM School of Life Sciences. A. Heddergott / TUM, Free for use in reporting on TUM, with the copyright noted.

As a contribution to increasing crop variety for improved food security in Subsaharan Africa, a leafy vegetable which is rich in vitamins and minerals shall be domesticated. At present, however, as highlighted by a research team from the Technical University of Munich (TUM) together with researchers from Nigeria, the plants still contain highly toxic substances that are carcinogenic and liver-damaging. The researchers are now aiming to generate toxin-free varieties so that the plant can be safely used.

These cereals have high yields and are staple crops. They are rich in carbohydrates, and thus are efficient calorie sources. In some countries however, they are often the only food source for the poor, and because certain grain crops such as rice contain very few vitamins and minerals, malnutrition and resulting diseases are the outcome.

Using additional plant species is important for preventing unbalanced diets and for increasing agricultural biodiversity. In this respect, fruit and vegetable are of crucial importance. “Although these orphan crops are often highly important locally and well-adapted to regional climates, they have been neglected in research and breeding activities, since they are minor in terms of global trade,” explains Brigitte Poppenberger, Professor of Biotechnology of Horticultural Crops at TUM.

Therefore, to promote research with neglected crops from Africa, the “African Orphan Crops Consortium” was founded, a consortium of universities, industrial partners and non-governmental organizations that is sequencing the genomes of the 101 most important orphan crop species of Africa, to create essential resources for research and breeding. One of these orphan crops is the leafy vegetable and medicinal plant Ebolo.

Ebolo (Crassocephalum crepidioides), which is used for example in soups, stews and salads, is still mainly collected from the wild. “In some areas, when the demand is high, over-harvesting occurs and threatens natural populations,” says Prof. Poppenberger. Therefore, it is important to establish cultivation techniques for plant production and to improve key characteristics through breeding, and for this purpose a research team at TUM has started to analyze the plant in detail.

Removal of toxins for the domestication of the leafy vegetable Ebolo

The team, headed by Prof. Poppenberger, in collaboration with Prof. Traud Winkelmann from the Leibniz University of Hannover, has demonstrated that Ebolo synthesizes a toxin called jacobine, which is a pyrrolizidine alkaloid. Jacobine is liver-damaging and carcinogenic, even in the smallest of quantities.

“A number of our modern crops such as zucchini, tomatoes, peppers and potatoes can produce highly toxic substances as well, but still, they were domesticated. The removal or reduction of toxins through breeding is often an important step in improving crop species,” explains Prof. Poppenberger.

The research team has succeeded in showing that the formation of jacobine is stimulated by nitrogen deficiency, and that it is absent in the related species Crassocephalum rubens. “That is, of course, an important finding. However, we should not rely solely on this related plant, as Crassocephalum crepdioides has other advantages, such as higher yields, even in very poor growth conditions,” says Prof. Poppenberger.

German-Nigerian cooperation to be continued

The findings regarding the biochemistry and genetics of jacobine biosynthesis will now facilitate the development of cultivation techniques and the breeding of toxin-free varieties, to enable a safe consumption of the plants. Since pyrrolizidine alkaloids are formed by many species as part of the chemical defense system of plants, a more detailed knowledge of the formation of these toxins is also of interest for other plants.

The scientists from Germany and Nigeria will continue to cooperate to promote research with neglected crops. In the case of Ebolo, for example, it will be necessary to test in the fields in Nigeria, if the removal of the toxin has a negative impact on insect resistance. After all, while improved nutritional traits for humans are desired, the plants should not also become ‘tastier’ for harmful insects.